Nike took a bold step earlier this year as they did away with the successful ‘Nike5’ moniker and relaunched all three small-sided game boots under the Nike FC247 banner.

Leading the charge is the eye-catching Bomba Finale II. A vastly different looking shoe to it’s predecessor, is the new Bomba a turf shoe that will help you dominate the court? Let’s find out… 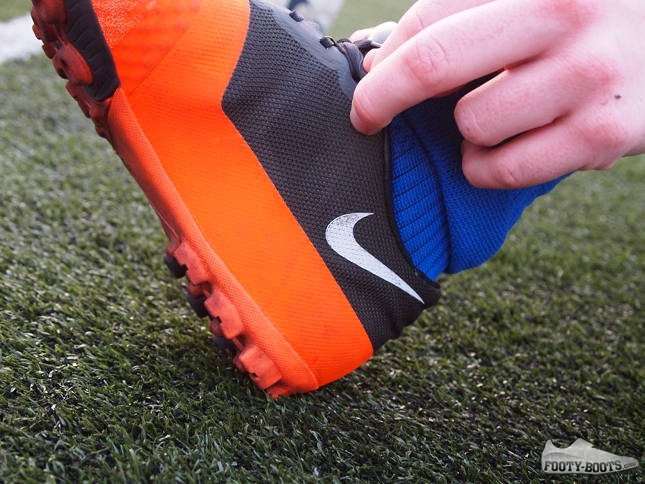 Rather than the firm, supportive KanagaLite upper of the first Bomba, the Nike FC247 Bomba Finale II is a much more flexible shoe. A mix of meshes and NikeSkin, the boot is exceptionally minimalistic in it’s upper and almost collapses around the foot once broken in.

However, during the break-in process I did find that – probably due to the ‘layering’ process that goes into the NikeSkin upper’s creation – there is some breaking in to be done on the forefoot.

A little papery at first the NikeSkin does fold in (a lÄ‚Ë‡ the Superfly’s Teijin) creating a little rubbing on the tops of the toes on first wear. However, this issue lasted little more than an hour of play, and was completely resolved by the next session.

As for the fit, I do get the sense these are a shoe that will fit the vast majority of players. Wide feet will find a roomy toebox and thin, unobtrusive tongue, whilst narrower hooves will enjoy the deeper lacing system for a snug fit. It’s worth a mention, though, that whilst NikeSkin will break in, it won’t stretch – so if they’re not a good fit out of the box, it’s worth going half a size up. 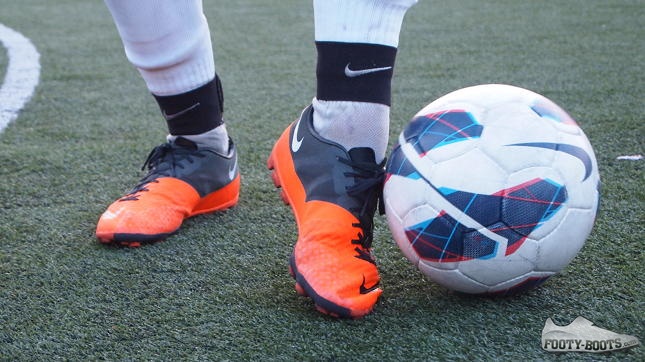 As with the fit, the Bomba Finale II’s touch gets better the more you use them.

NikeSkin is like nothing I’ve felt on a football boot before, with a unique construction that allows it to be multi-textured without adding additional elements to the shoe; a base honeycomb surface' inherently increases surface area-to-ball contact, whilst a waxy finish on the instep' adds a distinctive feel in the hands, and the high-wear toe zones are almost as coarse as sandpaper for added durability.

All of that comes together with the mesh to provide a completely intrusion-free contact on the ball across the shoe, meaning you can concentrate on the game (after a game or two to break them in!).

We’re going to go in bold on this one and say we love it.

Combining some of the structural know-how of the Nike GS concept and adding in the agressive colouring and textures of the Hypervenom, Nike have created a boot that looks as hard as it plays. 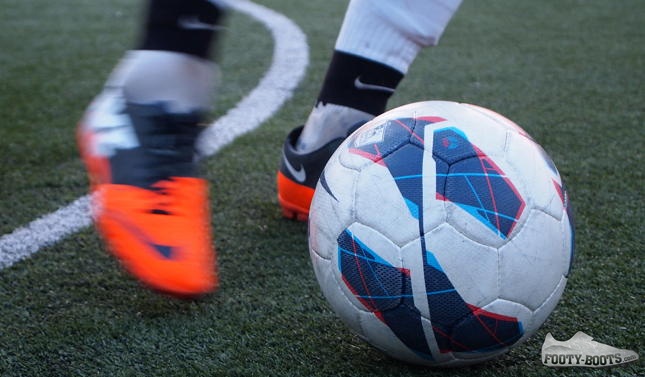 After some seriously intensive testing across the better part of six weeks, the Bomba Finale shows no signs of letting fast-paced games on a high-friction surface get the better of it.

Sure, the white Nike branding is showing some battle scars from rubber crumb pitches and the Total Orange is a little duller than it was when we first unboxed them, but structurally the boot is completely intact, even down to the smallest detail.

Given the amount of technical features on the Bomba Finale II, that’s a pretty remarkable achievement. 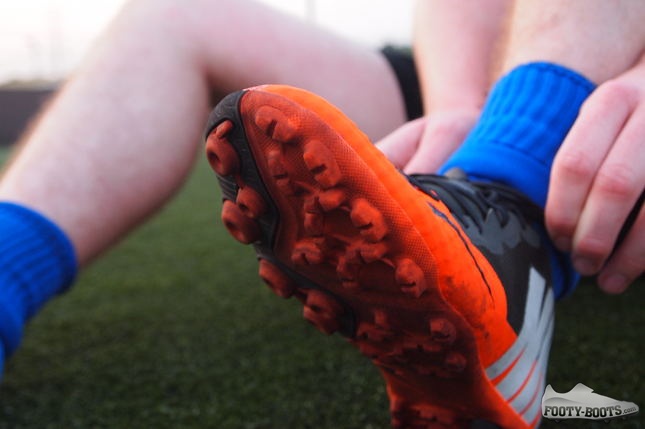 Starting from the ground-up, I’d first like to talk about the Nike Bomba Finale II’s traction plate.

For me, this is one of the best artificial turf plates on the market. Cleverly split between conical studs under the toes for ease of turning on the knees and oblong studs along the lateral side for multi-directional grip, Nike have come up with a hybrid that gives players be best of both worlds on an AG pitch.

But one of the questions we get asked frequently is ‘Can I wear them for full sided games on an synthetic pitch?’

The answer is, of course, yes. The boot is designed for traction on that surface, and that won’t change factors like grip, comfort or how you strike the ball.

However, the Bomba Finale II has a very ‘low-riding’ soleplate that gives a real sense of being close to the ground for quick changes in direction, and is wonderfully flexible for complete freedom of movement in tight spots.

This also means you don’t get that ‘spring’ back that you’d get from the soleplate of a boot with TPU or glass fibre plate – and whilst that’s not a problem on a small-sided pitch, covering longer distances in a full sided game means they will feel a little more sluggish compared to a traditional boot. 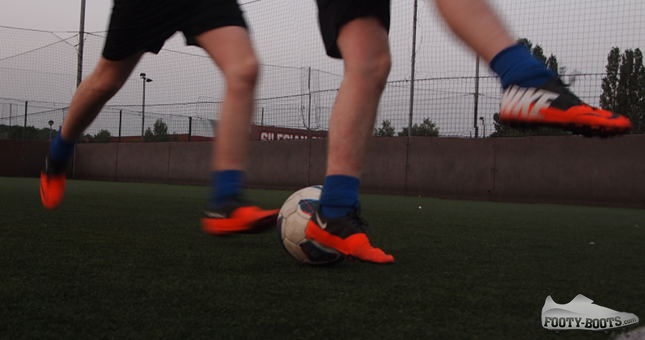 Now that’s out of the way, the side-offset lacing system gives a generous instep for great contact on the ball, as well as being super-thin for a really close ball-fell.

As well as being roomy, the toe-box is also low, and really forms around the toes the more you play in them, so if deft flicks and scoops are how you beat opponents in the cage, the Bomba Finale II offers that futsal shoe-like feel on an ultra-modern turf shoe.

At £76.99 RRP in the UK, the Nike FC247 Bomba Finale II is no steal. And whilst that RRP is less than the original Bomba Finale, we’d imagine few would be willing to part with that amount of cash for a fives shoe.

However, given our Nike5 Bomba Finale’s are still in use after two years, if the Bomba Finale II has similar durability that heavy up-front investment could buy you the only small-sided shoes you need for the next two seasons. 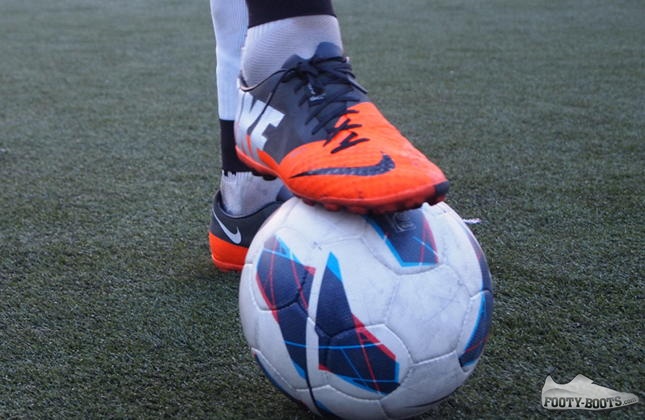 Packed to the rafters with features yet with a thin, minimalist feel on the ball the Bomba Finale II is right in that sweet-spot for a small-sided shoe.

The uncompromising traction and NikeSkin are arguably the stars of the shoe, and with a badass aesthetic, the right colourways could see the Bomba Finale II a real-long term favourite.

If Nike continue the good faith they’ve built up with the durability of the Bomba Finale I, if you can pick a pair up with a decent discount they could be the only fives shoes you need for years to come.

Written By
Kyle Elliot
More from Kyle Elliot
The Nike Stealth Pack is back for 2014-15 to kick off the...
Read More