Nike’s superb Elastico Superfly is receiving two new colourways to ring in the New Year (in addition to the limited-run ‘SE’ we saw just before Christmas), with one of them being this smart-looking Black / Crimson / Blue edition.

For those who weren’t up to speed when this shoe launched in 2014, the Nike Elastico Superfly is the new gold standard in small-sided footwear from the Swoosh.

Reason being, it’s the only one of their FC247 (five-a-side football, street football and futsal) to boast the Flyknit construction we saw on Nike’s big World Cup launches, the Mercurial Superfly IV and Magista Obra. 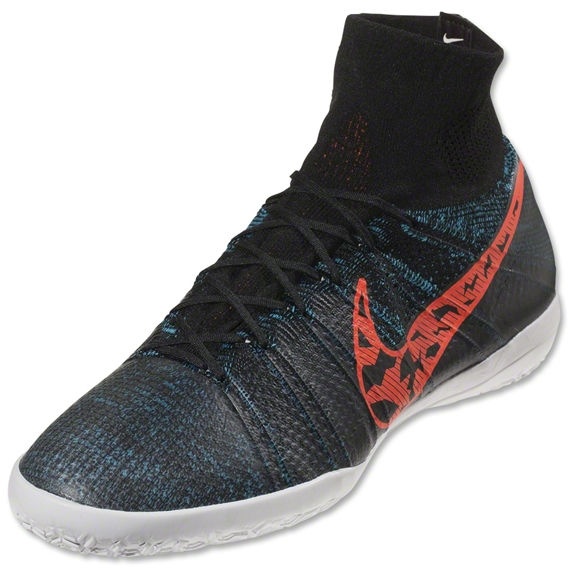 What makes it so good? Well, for starters, Flyknit offers up a completely new style of construction for footballing footwear.

Brought over from their running and basketball shoes, Flyknit allows Nike to create the shoe more like a sock, starting from the tip of the toe and running up towards the athlete’s ankle and culminating in the distinctive Dynamic Fit Collar you see here.

The ‘workability’ of the material also allows Nike’s clever footwear design bods to implement other components to help improve performance. 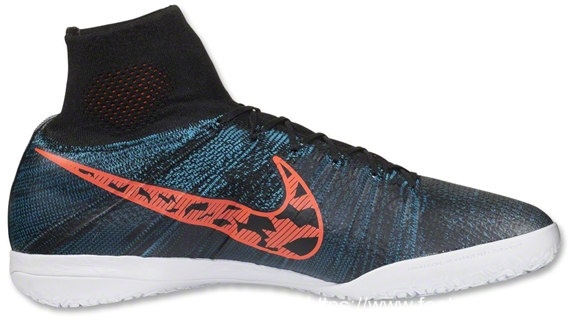 In the case of the Nike Elastico Superfly, that is things like the suspension bridge-inspired Brio cables you see running from the lace eyelets and into the soleplate, allowing for a foot-hugging fit and improved energy transfer.

Nike also bring across a NikeSkin finish to the Elastico Superfly – this allows the boot to be waterproof and improve tactile feel on the ball, but it can also be layered up in high-abrasion areas (such as the toe and instep) to improve durability.

Finally, it also allows for a unique aesthetic; here on the Nike Elastico Superfly – Black / Crimson / Blue, the main colour is black, but the weave’s blend of blue – as well as a crimson ‘reveal’ colour in the branding and collar – make for a pretty cool looking shoe. 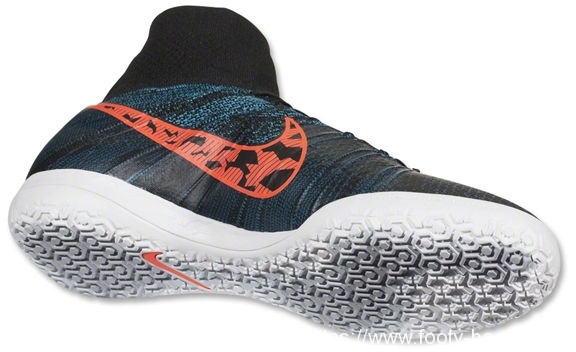 But all that effort into making a shoe feel like a sock in terms of fit is no good if you’re sliding around like you’re wearing socks out there on the pitch.

Which is why Nike have redeveloped both their Turf (TF) and Indoor Court (IC) small-sided plates for the Elastico Superfly.

Available in either variation depending on your game of preference, the Elastico Superfly’s traction plate is tuned for aggressive grip and comfort-boosting flexibility.

What are you saying about the Nike Elastico Superfly – Black / Crimson / Blue?

Drop a comment or rating below and let us know!

Nike Elastico Superfly | Black / Crimson / Blue, 8.0 out of 10 based on 10 ratings https://www.footy-boots.com/wp-content/uploads/2015/01/nike-elastico-superfly-black-crimson-blue.jpg