Nike are providing a way for small-sided players of both the cage and the street a new way to stand out this winter with the arrival of the Nike Elastico Finale III – Black / Volt.

Already a popular option for players who want something low-profile and aggressive from their turf or indoor shoes (the Elastico Finale III does come in both, after all) is the Vapor to the Elastico Superfly’s, well, Superfly: offering an Flyknit free vision of Nike’s top-tier footwear. 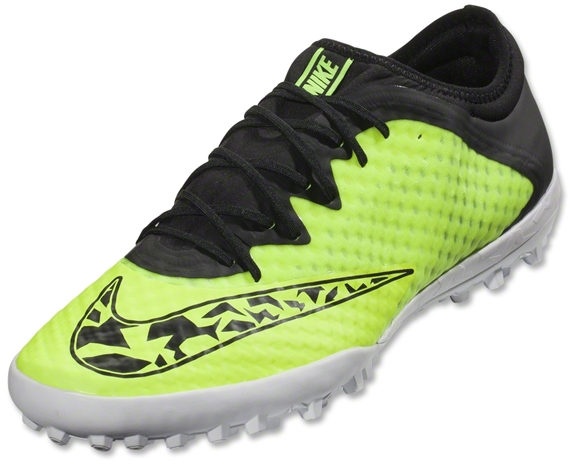 One of Nike’s favourite pallets at the moment, the ever-popular Volt contrasts beautifully against the clean black for a shoe that demands attention.

Teamed with a camo graphic-enhanced swoosh on the forefoot, and we’re almost tempted to wear the Nike Elastico Finale III – Black / Volt to more than just the local five-a-side pitch. Almost.

Of course, the bevy of features on the Nike Elastico Finale III would be all-but wasted at the local discotheque, anyway, as it’s all about traction, feel and downright nasty control.

The NikeSkin upper is a reenforced variation on what you’ll find on the Nike Hypervenom Phantom. This distinctive textured material is layered-up mesh and synthetic, fused together to create an upper than moves naturally with the foot.

Not only that, but the construction allows for a micro-thin feel for the ball, complimented by the tongueless design and textured finish to create a shoe that gives a glove-like fit with unbelievable grip and control.

The high-traffic areas are buffed up with some extra layers to improve durability – something that’s especially evident on the instep, which gains a black finish for a tidy contrast.

As mentioned previously, the Nike Elastico Finale III – Black / Volt launches this week in both IC (Indoor Court) and TF (Turf) variants to suit your surface.

Both are made from high-durability, high-density rubber, and are constructed to give aggressive traction and forgiving flexibility under foot.

Thoughts on this new entry into the FC247 range from Nike?

Drop ’em in the comments below!

Nike Elastico Finale III – Black / Volt, 9.2 out of 10 based on 3 ratings https://www.footy-boots.com/wp-content/uploads/2015/01/nike-elastico-finale-iii-volt-black.jpg

Written By
Kyle Elliot
More from Kyle Elliot
Months after it was first seen in the Premier League, Under Armour's...
Read More