Fresh from claiming yet another international tournament with Spain, Nike CTR360 III front-man Andres Iniesta rattles through some questions about the season ahead with Barca, and – of course – his new football boots. 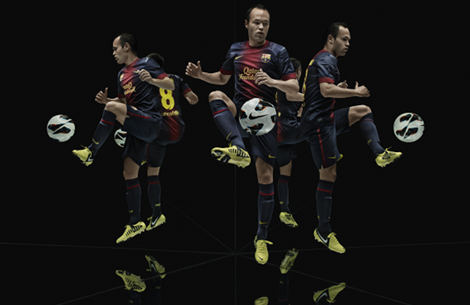 New season, new coach. What are your aims and objectives this year?

Our aims, our hopes, are the same as every season: we want to try to do things the right way, to reach the end of the season with a chance of fulfilling our objectives and winning trophies.

It is true that we have changed coach but our hopes and desires are the same as always, or maybe even greater. After last season, we are hungry to get back to and to carry on winning things.

We don’t know much about Tito Vilanova, the new coach. You of course do. Can you define him for us?

He’s someone who has been with us for the last four years. Maybe it would be better if he defined himself than we did but from our players’ point of view he’s someone who knows us very well and we know him well too.

He looks after all the smallest details. He will have a different level of responsibility now as first coach because that’s a position he did not have before, so in that sense I am sure that his way of doing things will change a bit because the demands are different.

But I think that we will carry on along similar lines as before. In that sense we’re all very happy to have Tito as coach. 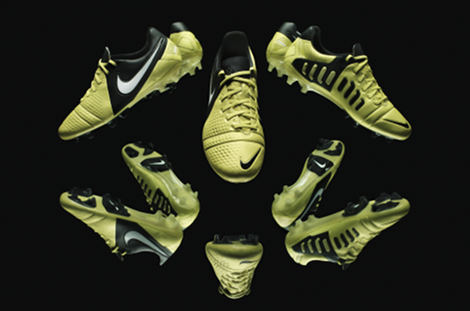 So, the philosophy remains the same?

Yes. I don’t think there will be big variations in the way that we do things. Every person, every coach, is different – they have different methods and different ways of doing things but we’re expecting something similar. I hope that’s the right approach. In any case, it won’t just be Tito’s responsibility, it will be all of our responsibility.

Now more than ever the players have to show that we want to lengthen this successful era and keep winning titles. I don’t think it’s just a question of the coach.

Is pre-season the worst time of the year for players?

It’s hard. You’re starting again and you’re looking forward to games but you have to do the preparation first. What we like is competition, real matches and yet you have to wait.

Pre-season is necessary in order to prepare in the best way possible for the year ahead. Pre-seasons are not what they used to be: there are tours, games, travelling. It’s the time of year you “like” the least. We’re all waiting for the season to start – that’s the bit we really like.

Do you succeed in properly switching off during the summer?

I try to. I think it’s good for your health. It’s good to disconnect from the day-to-day, to try different things.

The tension you accumulate over the year makes an impact and so I try to switch off because I think it is necessary after a demanding year. It’s nice to be with people you haven’t seen much, relax, have a good time, see friends.

Every year Barcelona successfully promote players from the youth team. You have been through that process yourself. As an established first team player now, do you have a pastoral role with the kids coming through? Can your experience help them?

I have lived that experience that they are going through, I know what the situation is, I understand what they might be thinking in their first year or their second year. You can advise them or respond to questions for them.

When you come up from the youth team it is important that you feel comfortable and happy with the veterans and in that sense I think they should be happy to encounter a group of players in which many of them have been through before the same thing that they are going through now.

We know what it’s like. So of course you try to help because they need that to see things clearly that maybe they would not see clearly otherwise. You can help them with the reality of their situation, guide them.

Is there any player we should look out for amongst those coming through?

I think Barcelona are extremely lucky to have lots of great players. It used to be that we only seemed to bring through midfielders; now there are attackers and defenders
too and that’s very positive for the club.

I would highlight those that have already spent some time with us: Thiago, who has been with us a while, Cuenca, Tello, Bartra. Different positions in which the club has a safe future.

Do you recall any advice that especially helped you when you were coming through?

I always got advice and people helped me a lot but I couldn’t single out one thing. It’s a long journey and there are lots of things along the way.

It’s not just a case of someone saying “enjoy your football” or “train hard” or whatever. It’s more a culmination of things that when you’re young you try to absorb, understand and
learn.

You take good things from lots of people but in the end the key is the trust you have in yourself, the confidence you have. You now that there will be hard moments,
moments when you have to battle through and put up with things.

At those moments you will need real faith in yourself. In truth, real advice, real lessons, come through experience. You learn from those moments. Also, every person is different: a piece of advice that helps one player may be useless to another. I think in the end it is the journey, the experience, that marks you rather than a concrete piece of advice.

You talk about faith in your ability. Have there been moments of doubt? Do we not appreciate from the outside just how hard it is, how much pressure there is?

There are all sorts of moments, yes. The most important thing is to know how to accept those moments, to understand them and know why things are happening as
they are.

The hard thing is to accept that when you are young. You have to accept lots of things that perhaps are not easy.

Is motivation even greater this seasons because of the failure to win the league and the Champions League last season?

But we mustn’t forget that this season just gone we won titles. It is true that they were maybe not the most recognised titles or the most important titles because the league is the one that rewards the most consistent team and the Champions League is the best trophy … so, yes, that means we want to fight for them again.

People talk so much about passion and intensity. Do we forget about the opposite; coldness, intelligence, control?

I don’t think we forget about those characteristics, no. I think the most important thing is balance, having everything – people who give you tranquillity, people who give
you power.

Like anything in life, balance is important, both in people and in football. You’re not better because you have more power or more control; what matters is that each person makes the most of the virtues he has.

How do you maintain that control and creativity in a game that’s going at 200mph, with all the pressure and tension?

Everyone is different. But we are used to playing with pressure, big games where everyone is watching, and when you are used to that you forget everything that surrounds the game.

When you’re on the pitch you try to enjoy it and personally I don’t think about the external pressure at that point. I think about enjoying it, abou inventing plays, about looking for passes, about playing well. That’s our job, our life.

Is your game natural or a product of work and preparation?

Before the games I try to visualise what I will encounter: the opponents, what will happen in my part of the pitch, what the game will be like. I try to control the game but there is also a part of the game that is intuition, improvisation, because football is not mathematics.

You have to improvise in almost every play; you can study the opponents very closely but then in a specific play the player in front of you can do exactly the opposite to what you expected.

It’s intuition that makes you dribble, or seek out a pass, or see a team-mate … you try to foresee what will happen and think before it does but there’s always a part of the game that is improvised. 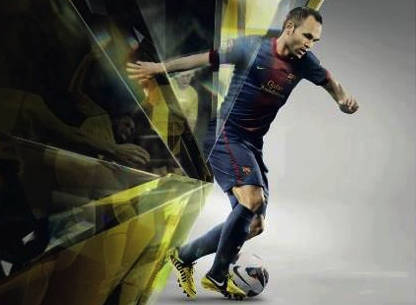 Talking of control and creativity, how does the Nike CTR360 III help you with that?

It’s the main tool of my trade, it’s what makes me feel comfortable on the pitch, secure when I touch the ball, when I want to dribble or make a play. It’s important to feel comfortable with the boot and I do.

There are new colours, a new design …

I mentioned it to lots of people. I have loved this boot from the first day i tried it. I feel very comfortable when I put it on. I notice that with each new boot but this time it is different. I feel happy, alert, the touch is good. I like it a lot.

In your mind what is the key role of the midfielder in today’s game?

The key with the midfield role is both vision and dominating the middle of the pitch — the engine room of a team: we’re the ones who distribute play, the link between defence and attack.

Our role is that and it’s that role that we enjoy most enjoy as a midfielder.

Every game you play now it seems like the opposition is set up just to defend, to spoil the game. Is it hard to stay faithful to an idea when confronted by that?

The idea is fundamental in those moments when things are not coming off, when it’s hard, when you encounter a team with everyone playing deep, closing off space; teams whose only aim is to defend and maybe launch a counter-attack.

For us, the challenge is overcoming that. The secret is simple: insist on what you’re doing, trust in it. We think this is the right pathway to be successful and so we follow along it.

Everyone has a different way of seeing football but I think football is a game to be enjoyed and to make the fans enjoy it. Beyond results, fans want to see a team play well, not just defend. But all approaches are valid in football so it’s not a criticism.

It’s just the way I see it.

Written By
Kyle Elliot
More from Kyle Elliot
adidas kit out their star man with a pair of striking new...
Read More