Whilst the campaign behind the Selecao’s new shirt inspires footballers everywhere to ‘Dare to be Brasilian’, according to Nike Football’s Creative Director Martin Lotti, when designing the Brasil Home Shirt for the World Cup' his team had to work hard not to be too daring.

“The jersey itself is super clean and simple, it was an exercise in restraint!” says Lotti, “When we speak with the players, they said two things are the most important; the yellow of the jersey and the crest that they play for over the heart”.

Having been unafraid to experiment and provide fresh twists in the name of innovation and providing consumers with a point of difference, Nike have something of a maverick reputation in kit design that’s not entirely undeserved.

But at the heart of the two Nike kits we’ve for the 2014 Word Cup so far, classic styling and blocked colours have been at their heart of each design – something that Nike calls ‘Soulful Design’.

“It’s important to deliver on performance, style and soul – those are the three elements that I believe every great Nike product has.” says Martin.

As well as meeting Nike’s three pillars of design, each of the World Cup kits must tell a story.

Lotti cites the France Home Shirt as an example,' “We focused a lot around the story of ‘Denim’ – something a lot of people associate as being American, when – in fact – it originates in France from Nimes, hence de-Nimes”.

“The soul element in this particular case was the collaboration with Bruno Big, with the Canarinho truly representing the team. It’s a soulful graphic that really captures the essence of the culture”. 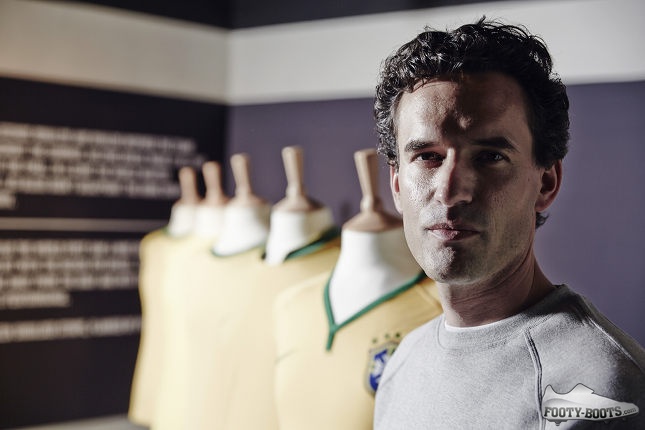 Here on the Brasil Shirt, ‘Soulful Design’ has also meant accentuating the important elements – the yellow of the shirt and the crest that gives players a sense of pride, whilst still giving enough detail to give people more to love about the shirt the closer they get to it.

Lotti cites the collar as an example of ‘Soulful Design’ in the on-stage part of his Q&A – the collar is a new, fresh idea to the shirt that captures street-smart style and looks great off the pitch, whilst still being exceptionally comfortable and made with removing distractions in mind.

Lotti also masterminded some of Nike’s impressive work in the London 2012 Olympics – so nows a thing or two about the big occasion.

Nike’s impact at the last Olympiad cannot be quantified. From the introductions we’re familiar with such as the Nike GS, to the innovations we’re still yet to see the best off – like FlyKnit – Nike used sport’s biggest occasion to debut and refine some of the ideas that will reverberate through this generation of sports apparel and equipment.

Since the 2010 World Cup, Nike’s ‘Considered Design’ initiative has exploded; from forming the shirts of the Nike federation teams in South Africa, we’ve seen it’s influence in the GS & GS2, athlete uniforms in London 2012, Jerseys in the NFL and NBA – and now, four years later, double the amount of bottles go into each kit – being used to create shorts, baselayers and more.

But why continue to evolve this technology? Surely Nike could have stuck with just making the shirts out of bottles reclaimed from landfill? 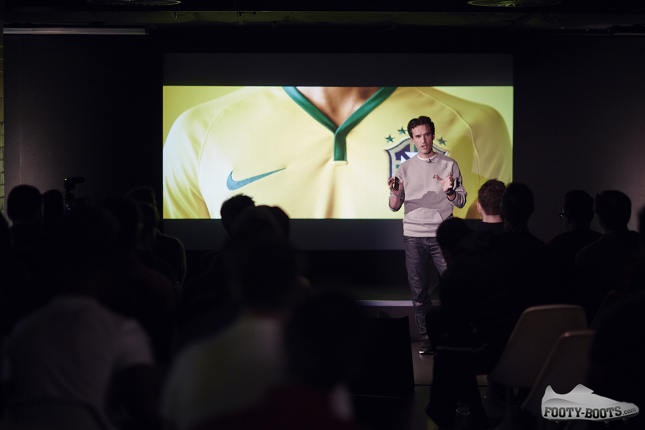 According to Lotti, it’s not in the Nike ethos to sit on an already good idea;

“There’s a saying at Nike: There is no finish line. ' And we love that, we live by that. I think that is the adventure of pushing the frontier on both a performance side and a sustainability side. We’re very proud of the fact that over 2 billion water bottles have been removed from the landfill since we introduced this technology”

Looking back at the Nike Brasil World Cup kits on display in the event space evokes memories of the players, goals and games that each of those shirts was worn in and only underlines that with each World Cup kit, Nike is tasked with creating a small piece of history.

But to Nike, it’s not just the photos that will be taken, or the replays of the games for years to come all baring their Swoosh on the chest of each yellow shirt – maybe it was when they first put pen-to-paper with the CBF, but definitely not anymore.

Lotti confesses that this is something that Nike have waited ‘Frankly, for the last twenty years’ for, and the feedback from the players and public affirms that this is the best possible kit for what should be a proud moment in Brasil’s footballing history.

“We’re very proud of being able to design the Brasil Kit. It’s one of those key moments; The Brasil team playing in Brasil in a World Cup. It doesn’t get bigger than that.”

Written By
Kyle Elliot
More from Kyle Elliot
We break out the Footy-Boots.com cameras and a fresh pair of adidas...
Read More