Both Nike and Cristiano Ronaldo are experts when it comes to pulling off the seemingly impossible. But we’ve got to admit, we didn’t think surpassing the infamous CR Safari was something that could be done – until we saw the new Nike CR7 Superfly III football boots. 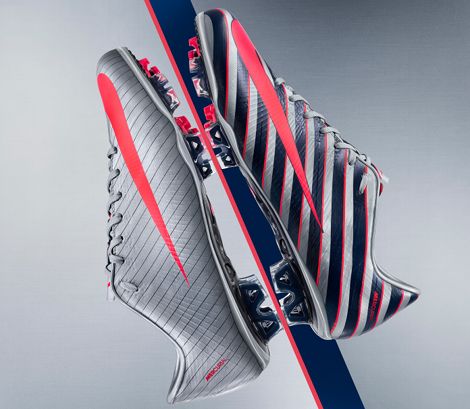 Styled in a completely unique striped pattern, there clearly aren’t enough superlatives in the world to describe the latest Nike CR7 Superfly III!

The striking Silver / Solar Red / Obsidian pattern offers something rarely seen on a pair of football boots, as each cleat has a contrasting pattern

The result is depending on which side you view Cristiano Ronaldo from, you’ll almost be looking at two completely different pairs of boots!

A subtle silver pinstripe contrasts wildly with the bold two tone Obsidian/Solar Red stripes to offer one of the boldest looks we’ve seen on a pair of football boots in a long time!

“CR7 Collection features a striking new Nike CR7 Superfly III signature football boot, mirroring the performance and style Cristiano Ronaldo embodies with a disruptive graphic treatment on the left and right side of the boot.

As CR moves into position or tracks back the left side of his boot reveals a subtle pinstripe effect with a clear screen and pattern treatment. In contrast, the right side features a bold contemporary stripe of Mach blue and Solar red which is a signature color theme throughout the collection.

Together, the boot graphics will create a striking flicker effect on pitch to stand out in the heat of game day competition.”

Ronaldo will wear the new' Nike CR7 Superfly III for the first time against Valencia this Saturday, with the whole collection available from the 18th of November – the boots, as with all all Superfly III’s will be available from around £280/$399.99

What do you think to this new' football boots release?

Written By
Kyle Elliot
More from Kyle Elliot
We give our thoughts on Nike's attack-focused new range of boots, and...
Read More