Turn up to any top flight football match these days and there’s more coloured football boots on show than at Milan fashion week or the World Ice Dancing Championships. 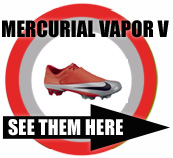 Since Ronaldo ran out at the 1998 World Cup finals in his yellow Nike creations, brightly coloured football boots have become the norm. Indeed, it’s now a rarity these days to see a player turning out in plain football boots anymore.

But at Euro 2008, the players contracted to Nike, with the exception of Cristiano Ronaldo, are going to change all that as they wear special edition Nike football boots created in close accordance to the tournament’s location.

The collection is inspired by the host countries of the 2008 European Championships (Austria & Switzerland) and the style of football boots seen on-field during the 1954 World Cup in Switzerland.

The Mercurial Vapor, the T90 Laser and Tiempo will all incorporate clean and technical outsole plates in a vivid blue, contrasted with vintage soft & crafted chocolate brown leather. Each football boot has a different tonal laser graphic on the heel to represent the location of this summer’s tournament and it is also screened in the sockliner. 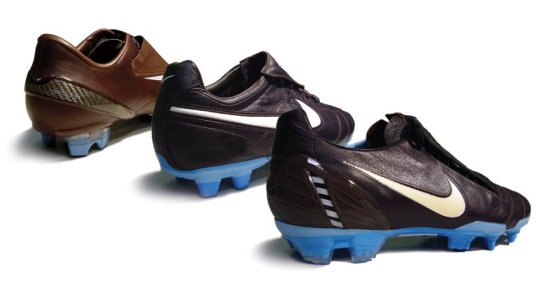 The new look football boots will be show cased, amongst others, by Franck Ribery in his Nike Mercurial Vapor IV’s, Gennaro Gattuso, Fernando Torres and Florent Malouda in the Nike T90 Laser II football boots and Cesc Fabregas, Ruud Van Nistlerooy and Andrea Pirlo who all wear the Nike Tiempo.

The Nike Mercurial Vapor IV football boot which is built for optimum speed and acceleration to allow players to skip past the opposition. This football boot has continued to be the football boot of choice by the winner of the Golden Boot Award in the English Premier League for the past six seasons.

Nike Tiempo gives the wearer ultimate touch in their game. The fold-over tongue on this boot provides a smoother ball-striking surface. Textured studs provide the playmaker with a 360 degree grip for optimal traction and pressure dispersion and the forefoot flex groove enhances flexibility for a more natural and efficient range of motion. The re-engineered heel features Zoom Air technology to give the player ultra responsive cushioning for protection and comfort. 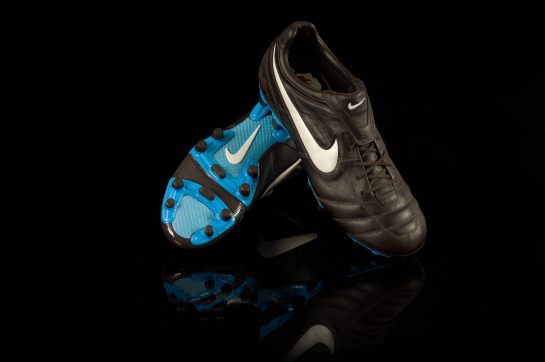 The exception to the Nike Euro 2008 rule is Portugal star Cristiano Ronaldo (well brown doesn’t go with his eyes does it?) He’ll continue to showcase his talents in a pine green coloured version of the Nike Mercurial SL.