With Manchester United Striker Wayne Rooney on his way back to the UK, fighting-fit and even, according to some accounts, half a stone lighter what better time for Nike to promote the powerful frontman with the latest in their series of Boom! virals?

We first showed you one a couple of weeks ago, when we spotted Zlatan Ibrahimovic in a new Blue Superfly II – and this is the next in the Boom! Series, which is set to include the likes of Essien, Iniesta, Sneijder and Diaby.

The idea is that Nike have an intimate little chat with each of these footballing megastars and see what makes them tick, whilst on the set of their photoshoot for the new Nike Pro Combat Baselayers. 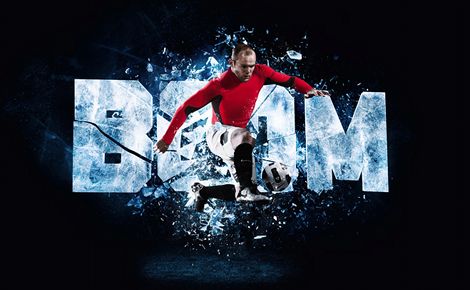 It’s not only the interview we find interesting, it’s always very revealing to see what goes into making one of these mega-bucks promotional sessions tick, seeing how the cameras are set up, how they get the players to pose for the image and even what football boots they’re wearing before they get black-and-white-ed out for the finished product!