Nike have applied for a patent on a new type of shoe which automatically laces itself up. 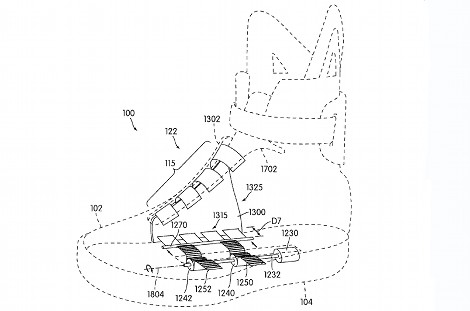 Major innovations like the screw-in stud, predator technology or, more recently considerable weight reduction don’t come along very often. So when we were told about a new patent that Nike have filed, it got us wondering, what if?

The application shows a shoe containing small motors the laces tight when the wearer to pull a button . Also, a charging station shown that the batteries can be recharged in the shoes .

Rather than using a traditional set of shoe laces, this futuristic footwear uses a series of flatter straps (so they can be retracted into the shoe seamlessly). For a pair of football boots, we could see the benefit of having a flatter, wider striking surface, in addition to the snug fit.

Much of the technology seems to be based around what Nike are calling the ‘Ankle Cinching System’, which seems to us to be the Ultimate Heel Counter!

This system pulls the back of the boot as close as possible to the Achilles’ Tendon and heel area, locking the foot in place – a real strikers’ dream!

However, whilst we love the thought of such a mechanism being implemented on our favourite football boots, there would be some definite drawbacks.

For example, the weight of the added motors would probably unbalance the shoe in a number of ways that would make them unsuitable for performance footwear.

Additionally, the fact that the shoes have enough voltage in them to warrant a charging station probably suggests that they wouldn’t be too safe to wear in a semi-contact sport (that’s traditionally played in the winter!) like football!

However, these designs are often concepts that never make it to retail, and are instead ‘whittled down’ to make the technology more functional (like the FlyWire on the Superfly II.) – so maybe by the time the T90 Laser V hits our shelves, it’ll have an auto-adjusting heel counter!

If you want to look at these plans in detail, check out the full patent application here: Full Patent

What do you think to this technology – pipe-dream or really useful?

Written By
Felipe
More from Felipe
Take a look at what the Japan national team will be wearing...
Read More