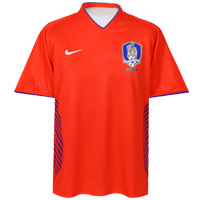 Under the new contract, which goes into effect next year, Nike will also provide 24 billion won worth in sporting products and allow national team players to use cleats from other football boot brands, the KFA said. Nike had previously paid the KFA a total of 15 billion won ($16.3 million) for a five-year contract that expires at the end of this year.

Adidas, which competed with Nike to supply the Korean national team football shirts, had offered a four-year deal worth 29.3 billion won. However, as revealed in a previous Footy Boots article, KFA officials were reluctant to sign with the German football boot brand over fears that Nike might pursue legal action against the Korean football body over sponsorship violations if it failed win a new contract.

Meanwhile in other football shirt news, the Hellenic Football Federation (HFF) has extended its kit supply deal with football boot brand Adidas through to 2012.

Adidas supplies all of the Greek national teams, including the senior squad that won Euro 2004 and has recently qualified for the 2008 finals. 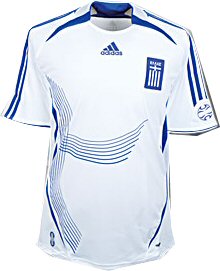 “The extension of our sponsorship deal with the Hellenic Football Federation confirms a long-term and successful partnership which started in 2004. The partnership is a natural alliance between the number one football brand and the 2004 European champions,” said Herbert Hainer, Chairman and CEO of the adidas Group.

“With the tremendous success at Euro 2004 in Portugal, the Greek national football team has clearly proven that sport is about achieving the impossible. We are proud to have adidas as our official partner and our primary objective will remain to enhance and build a long and dynamic partnership for the forthcoming years,” said HFF president Vassilios Gagatsis.

Written By
Felipe
More from Felipe
Los Merengues take the Top Spot for the first time since November...
Read More