After a fortnight of boot-spots which has revealed the testing of a new Puma King, Umbro Geometra, a Nike GS relaunch and a whole new adidas silo, the biggest one yet might have emerged as Neymar tested a strikingly-designed pair of black-outs with Santos yesterday. 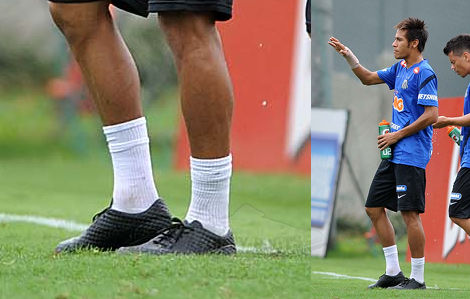 Spotted by the eagle-eyed DDChile, Brazilian sensation Neymar took to the training pitch in a pair of football boots unlike anything we’ve seen from Nike before.

The most striking feature of Neymar’s mystery Nike prototypes is that unique dimpled upper – the whole boot, from heel to toe, is covered in divots similar to those you’d see on top-tier match footballs.

Whilst we’ve seen elements and high-friction zones on plenty of football boots in the past, but we’d have to say this is the first time we can think of a distinctive texture like this wrapping round an entire boot. One thing in Nike’s favour, though, is how soft they look! Despite the textured upper, they really don’t seem rigid or inflexible.

Given that Neymar is the man wearing them, and their distinctive low-profile shape, we’d have to hazard a guess that these are some sort of Mercurial Vapor – or at least built on the Mercurial template like the Nike GS was – but there are some features that set them apart from what we’d expected to see next from Nike’s signature speed line. 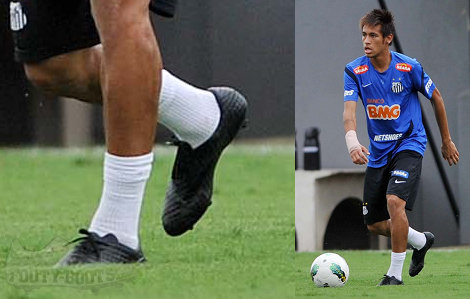 For starters, the side-offset lacing would be a big surprise to see on a Vapor. Since the line’s inception a decade ago, Nike have always strived for a ‘track-shoe’ style fit on their Mercurials, with centred lacing. These prototypes’ laces sweep off to towards the lateral side of the boot for a bigger instep passing/striking area.

The heel counter would be another point of difference to what we’d expect from a ‘Mercurial Vapor IX’. Nike have strived for an internal counter on every Vapor since the V/Superfly I – and whilst the adiZero and Puma evoSPEED have shown a speed boot can pull off an external heel counter, it would be uncharacteristic from Nike to move that way, too.

Finally, there’s the hugely unorthodox soleplate. It’s tough to tell from these photos, but unlike the ‘sharp’, angular sole of the current Vapor VIII, Neymar’s soleplate has a very sweeping, organic design to it, resulting in a distinctive ‘figure-of-eight’ overlap right underneath the arch of the foot.

If we had to guess, we’d imagine this double-renforces that crucial midfoot point, resulting in a greater energy return on shots and crosses. 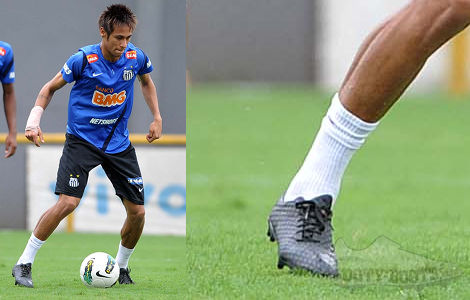 The asymmetrically-placed, rounded studs are also another talking point. Shorter and narrower than we’d expect from the studs on a Vapor, they look like they’d offer great ground penetration, without much in the way of pressure. Interesting to note, though, is that Nike look to be sticking with having just two studs in the heel as with the current Vapor.

For once, Nike have got us stumped with these completely unique-looking prototypes. If we had to bite the bullet, we could only guess that they’re either the Mercurial X or some sort of Nike GS 2.0. But truthfully, we have no idea!

But we can’t wait to find out!

Thanks again to DDChile for submitting these incredible images!

Written By
Kyle Elliot
More from Kyle Elliot
England's new blue Away Shirt might have had a rough ride so...
Read More