Santos FC’s star Neymar’s appearance in an unidentifiable black-out pair of football boots has got the boot-community astir with rumour and speculation – and we thought it was about time we threw our hat into the ring and explored the possibilities of what these mystery prototypes might be. 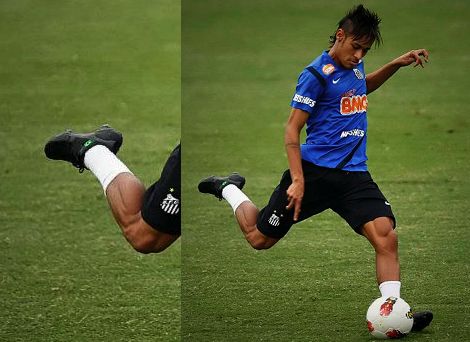 Outfitted in all-black, there’s no disguising Neymar’s boots have a few key features that have people talking, including:

So, with those four points already visible, it’s safe to say these are nothing like anything Nike have on the market at present. Rather than give one guess as to what Neymar’s mystery boots, here’s a few possibilities to chew over, along with how likely we think they are.

The first place anyone’s mind goes when a black-out appears is that they must be the next iteration of the boot the player plays in.

Now, whilst we have seen players testing new boots around a year ahead of release (Michael Ballack in the Lethal Zones, for example) we’d have to guess it might still be a little early to see personalised models like Neymar’s doing the rounds.

Expected to be launched in time for the 2014 World Cup in Brazil, Nike would be testing this new model an unprecedented two years in advance. Either Nike’s quest for elite player feedback is going to new levels (which we wouldn’t put past them…) or these aren’t the X’s. 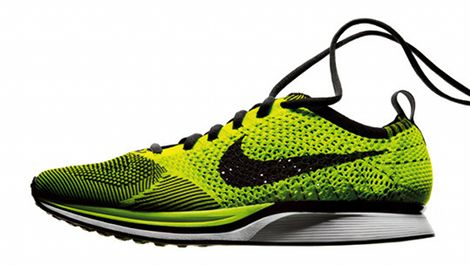 Whilst the Superfly was an interesting experiment for Nike in construction, pricing and development, we didn’t really expect to see the ‘Superfly’ name again anytime soon.

Though, with this prototype’s two-material upper, one of those materials could be Nike’s new ‘FlyKnit’. Designed as the next step to Flywire, Flykit encompasses the whole foot in a sock-like material, whilst drawing the soleplate closer to the foot.

Having a boot made of FlyKnit would be super-light and comfortable, however it would be horribly prone to damage and would give awful contact on the ball (we imagine). That said, the KangaLite-esque material on the forefoot of these prototypes would definitely help in that department. Bonus: Nike would get to keep the recognisable ‘Superfly’ name.

Now, here’s the wildcard. Some forums and Facebook pages have started to push the name ‘Mercurial Velo’ around, with the general impression being that this will be a limited-edition boot that uses most of the Vapor VIII’s feature-set, but with the inclusion of the FlyKnit technology that Nike is hoping will take the 2012 Olympics by storm.

Supposedly slated for a late-2012 release, we have to admit we’re super-skeptical. After all, when Nike have completely nailed the Vapor VIII – why bring out a ‘better’ model so soon after (though adidas’ habit of launching ‘SL’ boots weeks after a big launch shows it is possible)?

Another thing is the name. The ‘Velo’ name is awfully close to ‘Veloci’ – which used to be a Mercurial takedown model, and the ‘Nike Velo’ already exists as a cycling shoe that takes it’s name from the Velodrome.

The one thing that makes it fit is the timeframe; we saw Ozil in a similar prototype back in March, and now Neymar has a personalised pair 6 months ahead of their supposed release, we must admit this does seem a likely fit – though the same timescale could apply to the Superfly IV, also.

Special thanks to Joao Barroso, Gunt22 and DDChile for contributing to the debate on our Facebook page!