Tottenham Hotspur have submitted a planning application to Haringey Council for their new 56,000 seat stadium.

The new ground is set to be built next to White Hart Lane where Spurs will continue to play during the construction project. 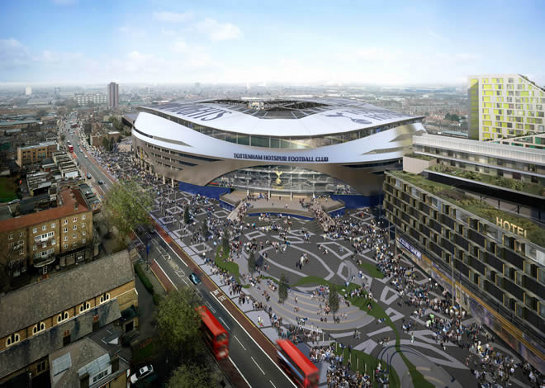 It’s estimated the cost of the project, which also includes 434 new homes and a 150 room hotel, will reach around £400 million. Spurs hope to be playing in the new stadium by 2012.

We have designed what will be a vibrant area 365 days a year and not a stadium with dead space surrounding it.

Our desire from the outset has been to create a scheme of major benefit for local people and to deliver the most fan-friendly stadium in Europe.

The inclusion of a new single-tier stand combined with a fantastic stadium design demonstrates our absolute commitment to create the most atmospheric stadium for our supporters.

Every fan will have an exceptional view of the action and will find themselves closer to the pitch than at any other comparable stadium.