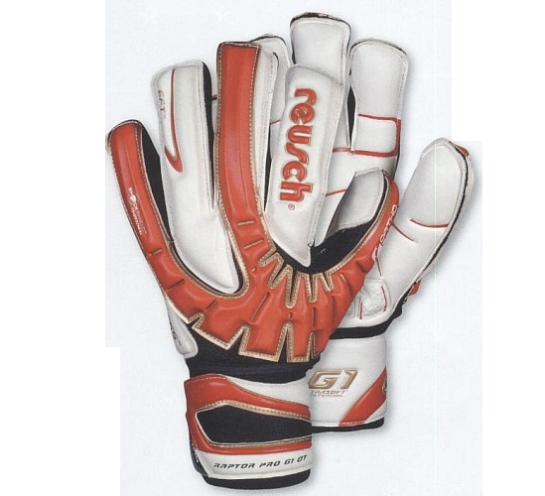 First, the Raptor. A clear follow on from the popular Reusch ‘Goaliator’ glove model, the Raptor range keeps many of the features that have made the Goaliator range so popular, and builds on them.

The Raptor is very similar to the Goaliator in the detail and construction of the backhand, with a complicated jagged cut of foam running diagonally over the backhand, and the backhand in general produced from numerous separate pieces of material with a fairly complicated stitching production.

As with the Goaliator range, the Raptor range includes the usual variety essential Reusch goalkeeper glove options, catering to a huge variety of glove cut and technology preferences, as well as to different weather conditions. For instance, the Raptor is available with or without Reusch removable Ortho-Tec protection, and comes in models with or without internal latex, and with any of Reusch’s specialist X1, G1, R1, Aqua Grip or Mega Grip latex foams.

There is also a comprehensive choice of glove cuts, including the unique Reusch Wide Cut, Bowl Cut, Negative Cut and Roll Finger cuts.

To their credit, Reusch again seem not to have opted for simplicity and lower cost production, but instead to have aimed at a superior looking, better produced and innovative goalkeeper glove design.

This must be a good thing: with a growing number of new brands coming into existence producing gloves mainly in the £20 – £40 price range, Reusch needs to continue to mark itself out with superior quality production and technology, in order to justify the £60 – £80 price of its top of the range gloves. But that’s exactly what it does, and in our view there are very few brands competing with Reusch in terms of quality of production and the level of detail in the Reusch gloves today. 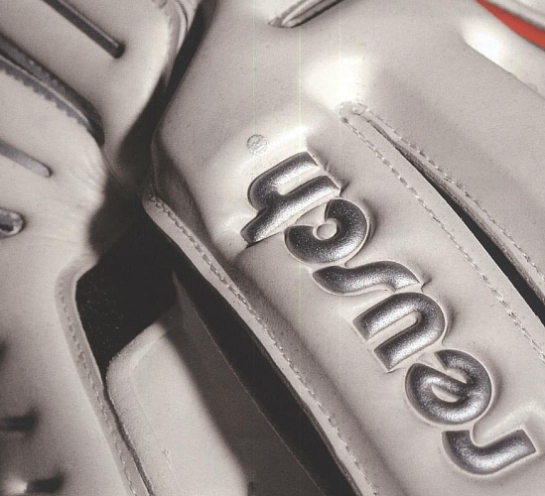 In a strange way, the biggest change in the any of the visual styles of the goalkeeper gloves in the 2009 Reusch range, is at the same time possibly the least innovative change Reusch have made for a long time.

The new ‘Core Function’ line strips away the visual colour and complexity of the backhand design of the Reusch Raptor and Goaliator ranges, taking the design right down to a comparatively simple pure all white appearance. Really, the only colours in the Core Line range are some detail in silver on the logo, and a fine strip of blue, black or red running vertically down the back of the third finger. 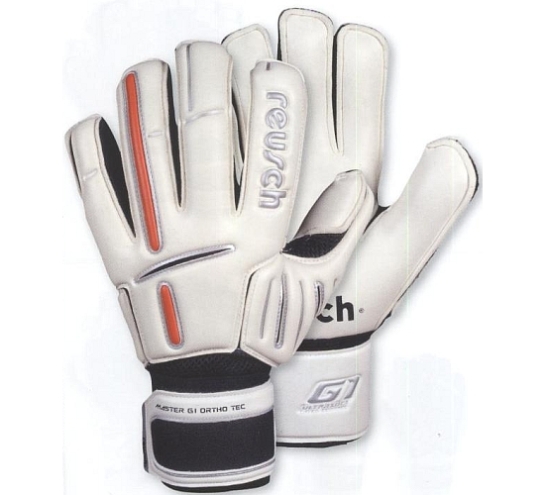 At first sight, this brings the Core Function line much closer to the popular glove models run over recent seasons by other goalkeeping brands like Sells and Selsport, which have both frequently utilised predominantly white designs in some of their most popular glove models.

But to suggest that Reusch is following other brands would be mistaken. Even this direction change to the more simplistic predominantly white visual design is done in the typical Reusch way, with a great amount of technical detail still retained in the glove.

Like the Raptor, the Reusch Core Function gloves are available with all the key Reusch technologies: removable Ortho-Tec protection, all the essential glove cuts, and a variety of foams. However, it’s interesting that of around 10 glove models in the Core Function range, there are 3 negative cut gloves and 4 roll finger gloves. That leaves only 3 in the more flat cut style, which has previously been by far Reusch’s glove cut of choice. Goalkeepers who may have wished Reusch would provide greater choice in their roll finger and negative cut glove selection will be very pleased by this interesting development.

The new Reusch range will be available from around February 2009, and is eagerly anticipated.

Written By
Felipe
More from Felipe
Model 123, Nike's football boot for xyZ. The younger version of the...
Read More