Last week on Footy Boots, we reported on new research that was taking place to determine the cause of metatarsal injuries. Keen to learn more, we contacted Dr Iain Spears who’s leading the investigative team at the University of Teesside.

Here, in an exclusive interview, Dr Spears tells Footy Boots about the state of the research so far, what he hopes to achieve and, hugely importantly, his views on whether player safety is being sacrificed for style and branding.

FB: There have been many theories as to why these types of injuries occur. Do you agree with any of them or do you have your own opinion?

IS: There are a multitude of factors, many of which are described in already published medical research. All of these are logical.'  However, they don’t explain what’s changed over the last 10 years in football.

Boots have certainly become more lightweight with a greater number of stud arrangements (including blades). In addition, the players tend to wear the shoes small so the boot is tight around the foot.'  Modern footballers also receive new footwear more often. I’m not sure this is a great idea. The foot comprises many small bones and when weightbearing these bones move about relative to each other (up to 15 degrees).The new boots and the way the players wear the boots could over-restrict these boney movements which could interfere with the natural biomechanics.

For example, I did some preliminary analyses using the foot model. When you look down at your bare foot as you put weight on the forefoot it should splay outwards – this is natural and is your body’s defence against high forces. I ran the preliminary model in this barefooted condition and then again but restricted the outwards movement (as could be the case with new and tight boots). The stresses at the base of the 5th metatarsal, the common fracture zone, doubled as a consequence. This was quite interesting but the model needs extensive validation before anyone should take me serious on this one.

Another theory is related to the amount of balance work players do nowadays. These exercises strengthen and condition the muscles on the lateral side of the lower leg and can reduce the risk of ankle sprains. However, some of these muscles insert at the base of the fifth metatarsal. Greater muscle strength usually means higher forces on the attachment site, which means greater stress in the 5th metatarsal.

When you watch the replays of Emile Heskey’s 5th metatarsal injury, it looks like he slipped and was about to go over on his ankle. Something stopped him and I suspect it was high activity of these peroneal muscles causing high stresses in this bone. Again, this is just a possible theory at the moment but the effect of strengthening the ankle stabilizers could be something we look at with the model. 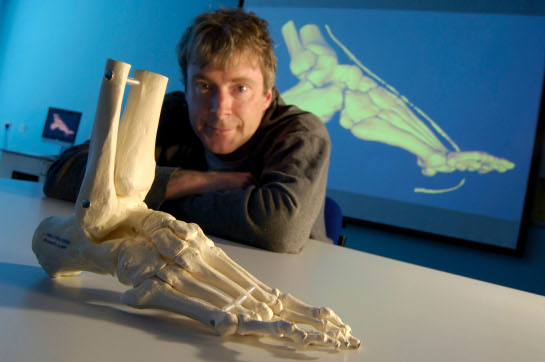 FB: Is there a pattern as to when metatarsal injuries occur?

IS: They do seem to occur later in the season which would make sense in terms of what is known about stress fractures. Like all stress fractures, metatarsal fractures occur as the result of an imbalance between ongoing stress and bone remodelling. The remodelling process can break down as a result of over-stressing the bone and/or not providing opportunity for the bone to repair itself. In such cases the micro-cracks develop to such an extent that the structural integrity of the bone is weakened and is prone to crack propagation. For footballers prolonged periods of rest are not an option during the season and this micro-damage may accumulate and comes to the fore with fracture of the bone.

FB: How has football boot design contributed to the problem if at all?

IS: Quite honestly I’ve got no preconceptions but it is certainly something I’m looking forward to finding out using the model.

FB: Are manufacturers going for style at the expense of protection?

IS: I haven’t seen the budgets spent on research and development but some of the major footwear manufacturers were criticized of this a few years ago. I’m not sure this is the case now and there is a growing unity between manufacturers, footcare specialists and scientists. In fact we’ve already been offered help and advice from football manufacturers so I think they are taking this seriously.

IS: I personally don’t like this concept (see above) and I know sports physiotherapists don’t like it either. There is a complex biomechanical interplay between foot and shoe which is delicate and in my view shouldn’t be changed unless necessary.

FB: Who will you be working with on this project?

IS: Prof Chris Nester and Prof David Howard from The Centre for Rehabilitation and Human Performance Research at Salford. My expertise is computer modeling of the foot and they can provide the data I need to validate my models. They’ve been working on foot biomechanics for several years and will be vital when we start to identity the problem and also devising the solutions. Also involved in the latter is an'  orthopaedic surgeon and Prof Rome (Auckland University of Technology). 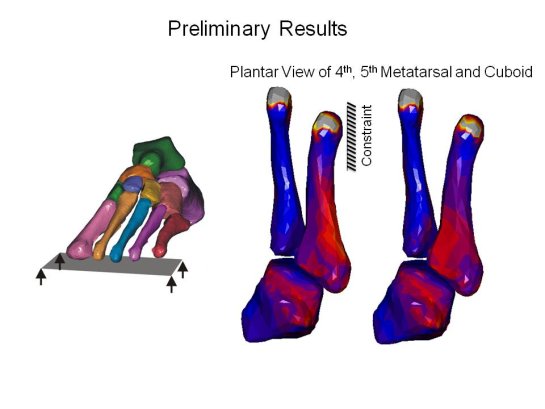 FB: What will be the main focus of your research?

IS: The main focus of the research will be to validate the model and then to assess the cause of metatarsal fracture. The Salford group have previously anchored markers onto peoples foot bones and then done motion capture (like you see in the creation of video games) of these people running. All this data will go into the computer model of the foot during strenuous activities. We can then use the model to start asking fundamental questions like “What happens to the stresses in the metatarsals if we tighten the shoe laces or increase the support underneath the longitudinal arch ?”. Further down the line, by modeling the mechano-biology, we’ll be able to ask “how long will the fracture take to heal if we do these rehab exercises?” The great thing about the computer models is that we can get the answers straight away.

FB: Do you already have any ideas on how to improve protection, without fundamentally changing the current style of football boots?

IS: In my view, with regard to the overuse metatarsal fractures, protection is not the issue. It is about designing the football boot to compliment the natural boney movements which would reduce the stresses and therefore the incidence of fracture. If this can be done then it’s a win-win situation because most players like to be able to feel the ball as they kick through it and with a non-invasive boot they would get that. However, protection against impacts like against the studs of the opponents foot is another issue and while it would be easy to protect against fracture, the players may not be so keen on the designs I’ve got in mind.

(Dr Iain Spears is a Reader in Biomechanics at the University of Teesside).