Crystal Palace have reached a three year agreement with Nike to be their official Kit Supplier from June 1st 2009.

We are pleased to welcome Crystal Palace into the Nike family and confirm that we will be the supplying their matchday and training kit from the start of 2009/10 season. Crystal Palace is a club with fine tradition and an exciting future and we look forward to providing them with Nike product for the next three seasons.

This is a tremendous addition to our portfolio to have a company like Nike as our official kit suppliers. Nike is a household name across the world and we are looking forward to a successful partnership with them in the years to come.

Voting is still underway at Crystal Palace with fans able to choose the designs for the 09/10 home and away shirts. 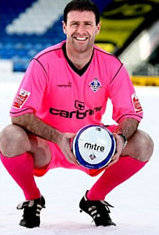 Elsewhere in England, Oldham Athletic will bring a Pink special one-off kit to a worldwide TV audience next month.

John Sheridan’s side are all set to sport a dazzling neon pink kit for one night only when the Sky cameras visit for their match against Leeds United on March 2nd.

The club are breaking new ground as the first football team to completely change their home strip for a League game in order to support a charitable cause, the new Victoria Breast Unit at The Royal Oldham Hospital.

Kit manufacturers Carbrini have stepped in to manufacture a one-off set of unique pink kits for the occasion, plus specially-branded warm-up shirts to be worn prior to the game.

The game-worn shirts will be auctioned off on the club’s website after the game and all proceeds will be donated to Link 4 Pink.

In a similar vein, Sheffield Wednesday has given the club’s shirt sponsorship for the next two seasons (2009/10 and 2010/11) to The Children’s Hospital, Sheffield and its charity.

In a pioneering move, the club becomes the first in the Championship to donate their shirt sponsorship in this way. Sheffield Wednesday’s new playing strip will be unveiled ahead of the 2009/10 season with the hospital name and The Children’s Hospital Charity logo emblazoned on the shirt and shorts.

Sheffield Wednesday chairman, Lee Strafford, said the decision represents how seriously the club takes its social responsibility and its role in the community.

We are proud to say loud and clear that Sheffield Wednesday wants to break the current football mould by getting away from the perception that football is just about money.

For even more football shirt news go to www.footballshirtculture.com.

Written By
Felipe
More from Felipe
David Beckham made his high profile début for LA Galaxy against Chelsea....
Read More