Nike are set to release the last of the new colourways in its hugely successful Nike Air Legend range of football boots, with the launch of the Navy Blue / Gold colourway, which is available from June 2007. 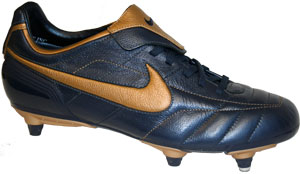 The last new colourway for the Legends will be the White / Blue / Black which will be released immediately before the new updated football boots, imaginatively titled Nike Air Legend II, come out in October 2007.

Written By
Felipe
More from Felipe
The latest colourway for the Nike Tiempo legend III looks to be...
Read More