After an exciting week of domestic football shirt unveilings last week, we’re thrilled to be kicking off this week with a new international shirt; the new Ireland Third Shirt from Umbro! 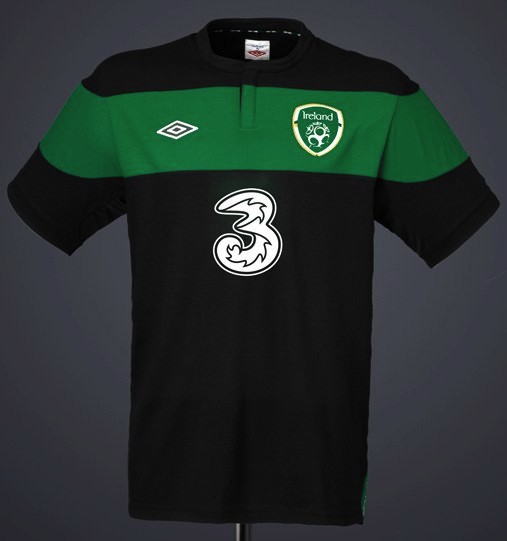 Currently taking part in the Carling Nation’s Cup (and doing rather well so far, we might add!) the Republic of Ireland’s new black change strip is the first kit to move away from the traditional green home and white away kit for a number of years.

As always with the ‘Tailored by Umbro’ initiative,'  the design team behind the new Ireland Third Shirt wanted to understand the motion of the football player and looked at ergonomic football forms rather than having a garment created on an existing muscular body form. The result is the creation of a football specific form which takes into account the shape of the body when playing football.

The classic Henley neck is inspired by the 1350 minutes a day that you don’t spend playing football. Meaning when you’re wearing the new Ireland Third Shirt you can be sure it looks as good during'  your 1350 minutes off the pitch as it does during your 90 on it.

Technically, the Ireland change shirt is crafted to the highest specification from a textured fabric that provides comfort and breathability. This jersey feels absolutely fantastic on the skin. This is a result of the polyester blend used on most of the shirt. It looks and feels comfortable like cotton but is extremely effective at absorbing moisture away from the skin and drying quickly. Anatomically tailored sleeves provide a great look and excellent feel whilst dart detailing is employed for an enhanced fit. 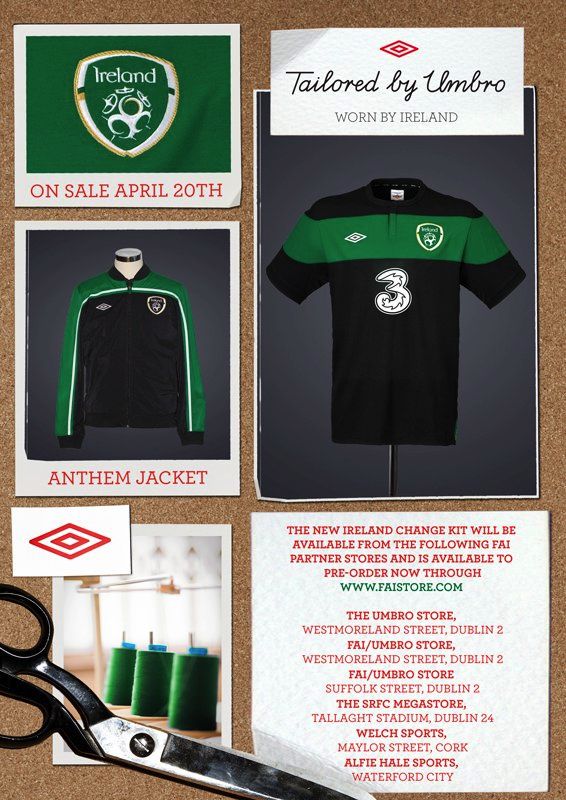 As with most of their new kit releases, Umbro have also also crafted a new Walkout/Anthem jacket, which features the FAI crest embroidered on the chest (which you can see in the poster). This jacket is shaped for an ergonomic fit and the black and green colour way compliments the jersey beautifully.

Many keen Irish football fans may well notice that the new Ireland Third Shirt is releasing very quickly after the white Away shirt. Well, Jonathan Courtenay, director of Football at Umbro Ireland was quick to explain away the situation;

”We are delighted with the new kit, its something significantly different than what we have had for a number of years and I cannot wait to see it on the team. As the current white away kit launch was delayed last year due to a change in sponsor both the stunning new black kit and the 2010 white kit will be alternated depending on the opposition. I look forward to hearing the fans opinion on what I feel is a kit that is just as suitable for your 1350 as it is for your 90 minutes”

The new shirt will be available from 20th April from the FAI Store online and through selected retailers.

So, what do you make of the new Ireland Third Shirt?

Use the ratings panel below, or leave us a comment!

Written By
Ramsay
More from Ramsay
Castrol Data suggests that Ryan Giggs will be the key to Manchester...
Read More