A new study conducted by the Football Association in England has revealed that young players across the country famous for it’s passionate support of the beautiful game are being forced to hang up their football boots prematurely for a variety of reasons. 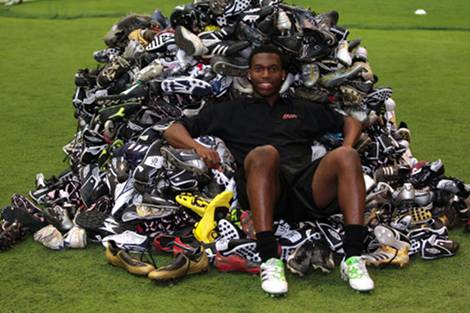 So many young players are hanging up their boots too early, Danny Sturridge seems to have found a good use for them, though…

At a time of year when interest in football is at fever pitch (pun very much intended) a new ‘Just Play’ survey by The FA and Mars has revealed a staggering 54% of guys aren’t enjoying regular kick-abouts with their friends.

For those not in the know, the FA and Mars have teamed up launch the ‘Just Play’ initiative, which aims to encourage 150,000 adults to get playing footy again through a variety of projects, including the launch of 100 new FA Mars Just Play football centres.

But it seems that the job might be bigger than previously expected, as this new study reveals that over half of men in the average amateur football age range aren’t even enjoying a kickabout any more!

On average, men feel compelled to hang up their football boots due to a wide range of reasons including work commitments (37%), friends dropping out the game (20%) and the arrival of children (19%). One in ten men also admitted that pressure from their partner has led to them retiring before their time. 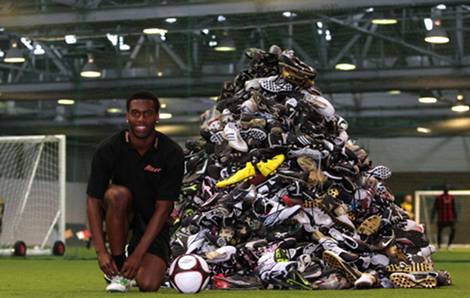 No football boots are safe from being hung too early… How many different kinds can you spot?
Supporting the findings, Sport England has identified that one of the biggest groups hanging up their boots are young men aged 16-19 years old, who should be enjoying some of the best years of their grassroots football careers.

The FA Mars Just play programme is designed to inspire adults to play regular, accessible football in any form no matter what their level of experience and ability is. The FA and Mars are aiming to create over 100 FA Mars Just Play centres across the country, delivering casual football sessions that can benefit up to 50 participants at any one time.

“It seems such a shame that people appear to be giving up on playing football so young. I loved playing football with my friends when I was younger and would still be doing that now even if I wasn’t playing professionally. All the old-school games were brilliant, jumpers for goal-posts, World Cup, headers and volleys, three and in.

“That’s why I’m supporting the Just Play programme. It doesn’t matter what level you are or experience you have, it’s all about having fun and playing the game you love, whilst fitting it round the every-day commitments that seem to stop people playing. The FA and Mars are really encouraging the nation to not retire before their time.”

The Just Play programme is part of The FA’s National Game Strategy, a £200 million pound investment into grassroots football, which has so far arrested the decline in 11 a-side organised football. The stabilisation of our national game has been achieved by The FA recognising adults need for a range of flexible formats of the game alongside the traditional Saturday and Sunday organised leagues.

To get involved in a kick-about near you and to find your nearest Just Play centre, search for Just Play online: www.justplay.thefa.com

Written By
Michael D
More from Michael D
Read how Harry handles the pressure of being England's talisman, despite media...
Read More