Doing away with much of the sunshine yellow from last year’s shirt, the new Barcelona Home kit takes it’s queues from older editions of the famous jersey by sticking to the famous red and blue that Barcelona has been famous for, for so long.

The biggest talking point is the change of sponsor – once famous for being sponsor-less, the Catalan club has spent the last few years with the logo and name of Unicef across the front of the jersey, increasing the profile of the global children’s charity.

However, the Camp Nou’s financial troubles are well documented, and have turned to a more financially viable shirt sponsor for the 2011-12 edition of the new Barcelona Home kit.

The deal with the Qatar foundation is the biggest of it’s kind earning Barca 125 million over the course of the next 5 years, and should go some way to stabilising the bank balances of the club.

That’s not to say Unicef is done away with all together on the new Barcelona Home kit, as it will now appear on the back of the shirt, directly below the player’s numbers – which is a nice touch. 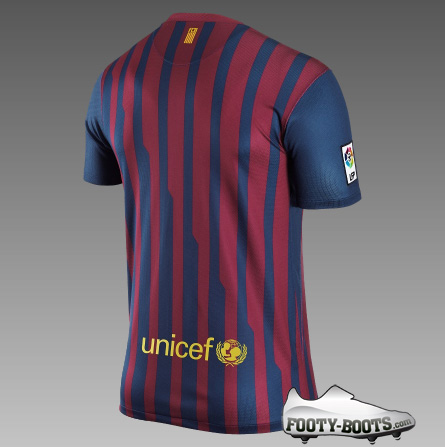 One touch we’re not so sure of is the diagonal thinning of the stripes that happens across the front of the shirt – but we’re sure it’ll grow on us as we get used to it!

As with the new 125th Anniversary Arsenal Home Shirt, the new Barcelona Home kit is among Nike’s most environmentally friendly ever!

Taking last year’s considered design initiative to the next level, the shorts are now made out of the same recycled material that the shirt is, meaning Nike can recycle even more plastic bottles from the world’s landfills to produce their football shirts! 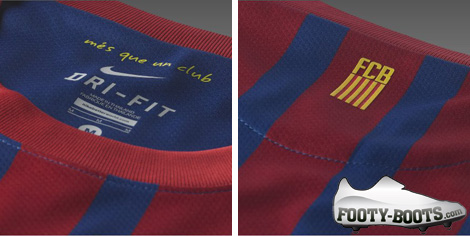 One thing which remains unclear is whether the logo will appear on the back of the shirt in Champions League games, as rules permit the use of only one logo. However, it has been conformed that every shirt sold will feature the Unicef logo on the back.

So what do you make of the new Barca strip?

Written By
Kyle Elliot
More from Kyle Elliot
Konami announce the first batch of downloadable boots and kits for the...
Read More