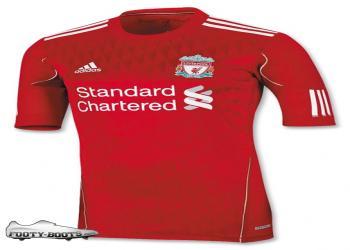 Liverpool FC wanted a new kit that could live up to their prestigious history and takes inspiration from the kit worn during the triumphant 1989/90 title winning season.

In terms of design aesthetic, this is a traditional all red kit with key features including a jacquard fabric (a fancy name for woven-in design), a laser cut woven crest execution and rich metallic gold piping detail which all help to create a jersey steeped in history and tradition with a stylish modern twist.

The new Liverpool home shirt with a mix of modern and traditional style.


The Liverpool crest has also been freshened up in tribute to the 1989 Hillsborough disaster, but adidas has left the eternal burning flames intact. It is heat-pressed over your heart, with the embroidered adidas logo on the right chest.

To compliment the shirt, the all red shorts and socks.

This new Liverpool home shirt also features their new sponsor, Standard Chartered, who will continue as shirt sponsor until at least 2014.

The shirt is made with the adidas ClimaCool’® advanced material, engineered to reduce heat and moisture build-up.

A simple grey colour will be worn by the goalkeeper.

This is the first of three new designs Liverpool will be launching this year, what do you think?

Written By
Felipe
More from Felipe
It's been another quiet week then! Diving, stamping, poorly judged goal celebrations...
Read More