The Footy-boots.com team were all enjoying their Sunday Afternoon roasts and post-match baths, when all of sudden, tweets, emails and Facebook messages began flying in left, right and centre with fans citing an incredible boot-spot!

A long time Nike-man, Nani was notable among Nike’s current roster of players for preferring the Mercurial Vapor VI over the wildly popular Superfly II, so to see him in anything other than Nike is definitely a surprise; due to his clearly specific demands from his football boots.

Though this isn’t the first time in recent weeks that we’ve seen Nani outside of his Vapors, many boot-spotters clocked the pacey winger in training last week in the adidas Predator_X, definitely an auspicious choice for such a speedy wideman. 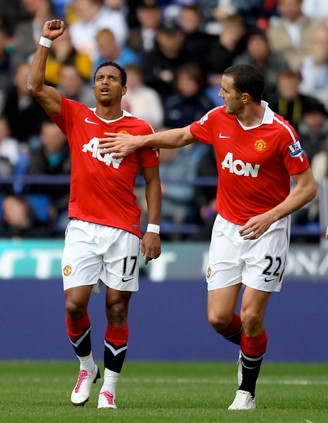 Another note, it looks to us that Nani is wearing the synthetic version of the adidas F50 adiZero, making him one of the few Pro’s not to use the leather upper option.

We’d speculate that this is because Nani’s not too fussed by leather, evidenced by the fact that he’s a long-time Vapor-wearer, or that he wanted the boots to be as light as possible.

Whilst definitely a strange move for Nani, we can only speculate that he’s in a contract grey-area at the moment due to the fact that he’s tried out football boots from adidas on more than on occasion in such a short space of time.

If it was a one-off incident we could guess that Nani’s boots had ripped or been unsuitable for the turf in the warm-up, forcing him to borrow some off a team-mate, but as Manchester United are a Nike club we would put money on Nani having a spare pair of Vapors if he wanted them.

Nani has also featured in some of Nike’s most recent campaigns, contributing several ‘Inside the Pro’ short videos to the Nike Facebook page. So here’s hoping that Nike are able to keep Nani on their books for the time being.

Well, either that or the new Voltage Cherry colourway was a step too far for him!

Shout-out to our man with the Eagle-eyes Chief Daniels who was the first to tell us about the spot!