After months of speculation, Nani has officially been presented today as adidas’ latest brand ambassador, following a trip to adidas HQ in Germany.

Portuguese winger Nani, born LuÄ‚­s Carlos Almeida da Cunha, caused a stir back in September when he turned out against Bolton wearing the adiZero – and putting in a man of the match performance to boot.

Formerly an advocate of Nike football boots the Manchester United player was one of the few to shun the Superfly in favour of the less technologically-enhanced Mercurial Vapor, and will present a huge coup for adidas.

Whilst simmering off the boil lately, Nani has had an excellent overall season for club and country and will present an excellent ambassador for adidas at both Old Trafford and Estadio Luz – which are two areas normally dominated by Nike. 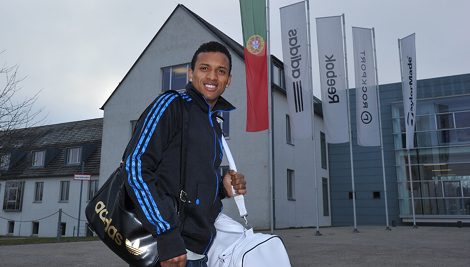 As part of his induction into the Three Stripes family, Nani stopped off at adidas HQ in Herzogenaurach (en route to tonight’s game against Argentina in Switzerland) to tour the facility and pick out some adidas apparel for his travels.

In a video interview, Nani also commented that the best part of his day in Germany was having his feet measured and some custom football boots being made specifically for his feet – we can’t wait to see what Nani can do now he’s playing in some made-to-measure cleats!

Good move for Nani? Or with Portugal and Manchester United both being Nike territory, should he have stuck with the big tick?