Whilst we’ve been busy ogling signature football boots for Cristiano Ronaldo and a host of dazzling new cleats for adidas’ top players, another limited edition boot has been gracing pitches that might well top the lot in terms of quality design!

MLS fans in the know will have seen Chris Wondolowski wearing a very unusual pair of Nike Hypervenom Phantoms this past weekend, with a custom Black/Chrome/Blue colour combo perfectly matching his San Jose Earthquakes kit.

However, unlike regular Hypervenoms, Wondo’s Phantoms contain an intricate pattern running throughout the Black portion of the upper, giving off a gorgeous sublimated effect. 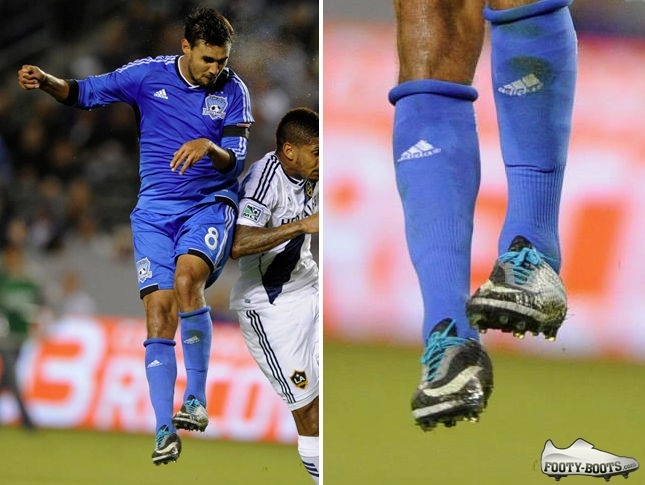 The reason? Chris is representing Nike’s N7 initiative; Nike’s drive to make sport and opportunities in the world of soccer more accessible to Native American and Aboriginal populations in North America.

As someone who it s half Native American – from the Kiowa tribe – the forward was proud to lace up his new boots this weekend and throw his weight behind the N7 drive – not to mention carry the pattern, inspired by traditional Native American art, onto the pitch.

Wondo has certainly had the spotlight on him this week, scoring the winning goal in a match that takes the Earthquakes through to the next stage of the CONCACAF Champions League

Definitely a great initiative by Nike, complimented by an absolutely stand-out design.

Should the Swoosh ever want to fund-raise for the N7 Initiative, you can put us down for any pairs they decide to sell off!