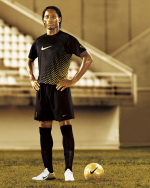 Jose Mourinho says he has no plans to sign Didier Drogba despite stories linking the striker with Inter Milan.

But the ex Chelsea boss gave the story short thrift insisting that he was in the dark saying:

I don’t know where Branca was, I was at dinner at Cernobbio. I know absolutely nothing about this story.

I know on the other hand that Drogba is part of the history of Chelsea and, from afar, it seems to me that he is and will be a Chelsea player.

Meanwhile the current Chelsea coach Luiz Felipe Scolari has hit out at the claims with a rather bizarre response. He was clearly upset when questioned about the story at a press conference. Asked if Chelsea had given permission for the Ivory Coast international to speak to the Italian club he said:

I do not sleep with Drogba. Where he was? I don’t know. I’m not a policeman for my players.

Ask Peter Kenyon, ask Roman Abramovich.'  I don’t know, I am only the coach.

Written By
Felipe
More from Felipe
The Liverpool manager is still talking a good game after a disappointing...
Read More