We recently had the chance to head out to Madrid to spend the afternoon with Jos'© Mourinho to talk about training and fitness at the adidas miCoach event – but adidas had a surprise in store for us when they said we’d be taking to the field with the Special One for a training session!

So, we thought we’d share some Mourinho-approved tips and training from the day with anyone who’s trying to make 2011 their best footballing year yet! 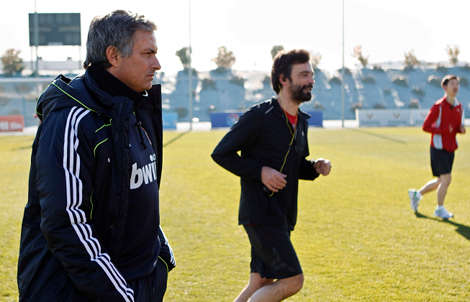 Having left the UK under a blanket of snow, we were pleased to arrive in Madrid to a bright and sunny day – even if it was a bit brisk. A perfect day to hare about a Real Madrid’s Valdebebas complex, then!

As we entered the home training ground, the adidas staff had laid us out a selection of nifty goodies to train in. As well as a top and shorts, adidas had also given us one of their latest miCoach gadgets – the miCoach Pacer – that was going to track our heart rate and other data. 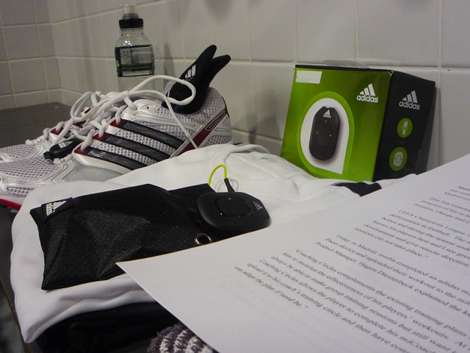 The two adidas coaches went on to explain why cardiovascular exercise is so important to footballers and other athletes, in particular the idea of measuring your heartrate in zones to achieve the best results, with Mourinho chipping in and explaining how he uses the techniques on the first team at Real Madrid.

The main idea being that interval training exercises like the ones we were about to do get the heart used to working harder from different levels of intensity. Rather than just sprinting from ‘cold’ or a constant jog, exercises like these are perfect for footballers as they get your body used to going from jogging to sprinting, and recovering effectively – just like in a match. 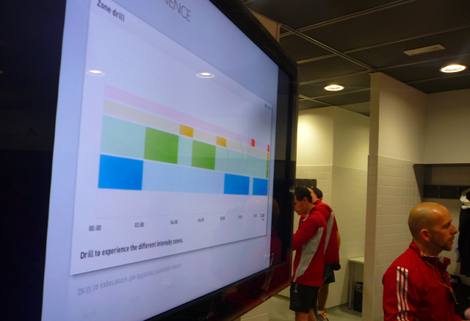 So, before we go any further it’s worth noting that whilst we were using the new miCoach gear, you can do any of these exercises on your own, all you need is a stopwatch or the free miCoach app that’s available for most smartphones.

You could even work to the exercises on by following this simple translation:

Click each exercise to see it in more detail!

First up was a relatively easy workout, taking us through the ‘easiest’ of the three stages, alternating between running and jogging before bringing heart rate back down and finishing in the blue zone.

Even though this is one of the easier workouts on the football miCoach scheme, thanks to it’s 25 minute timing you’ll always feel like you’ve had a good session. Mourinho explained that an exercise like this was a great warm-up for fitter players, and the adidas coaches pointed out that due to the short time in the blue zone it’s perfect for players who feel they need more ‘mileage’ in their legs.

The next routine was one that Jos'© said he’d have his players do over the winter break – something that keeps the heart guessing by alternating between running and jogging, with the occasional drop into the blue zone so the player can burst into a run.

The best thing about this routine was how long it lasted – at a touch over 20 minutes, this workout'  was great for if you’re short on time – no matter how fit you are a 20 minute interval exercise like this will still do you some good.

Our final run of the day finally pushed into the Red zone and was sold to us by the Special One and the adidas coaches as one that’s great for strikers and forwards. Rather than a constant pace or constant ‘changing gears’ like a midfield player.

The best way to imagine it is tracking with the opponent’s back four, or with the offside trap – before making that vital 30 sec red-zone sprint to loose your marker or latch onto a long pass. The short amount of time in the green zone should also help train your heart and lungs to recover on the move! 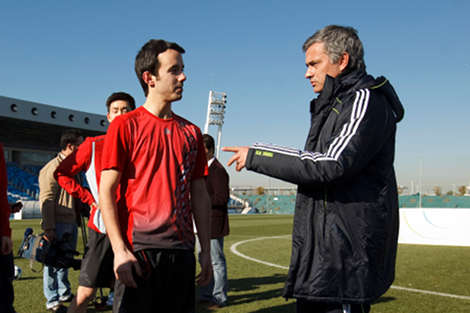 After we had a cool down and thanked Jos'© and the coaches, we left the pitch and headed back home (well tried to, the snow left some of the Footy-Boots team stranded!).

If you’re looking for more ideas on how to get the most out of your run, you could do a lot worse than heading over to miCoach.com – it sounds like a plug, but it’s genuinely, entirely free – and you don’t even have to sign up to preview most work-outs – but setting up and account does give you some nifty benefits!