Being a defender is a tough job at the best of times. You don’t get as much glory as your attacking counterparts, you can’t switch off for a single second and you only feel like you’ve done your job right if you completely ruin the other team’s day.

But maybe worst of all, you don’t get any football boots made for you!

Wingers get Speed boots, Strikers get accuracy boots – so find out what the World’s best defenders are wearing at the moment!


Obviously not the best picture of Clarence Goodson, but we had to find an excuse to squeeze these new Racecar-Red Create Pro II‘s!

Great to see that the Morelia is being represented. Not only did it get a great write-up here on Footy-Boots.com, it’s one of those boots that just gets better the longer you wear it.

Proof that you can’t keep a good boot down, the Predator Powerswerve returns! Though the fact that it is only on the feet of two defenders is probably a sign that the teething problems with the Predator_X have finally subsided!

If there was any football boot that you would associate with a defender it would be the Copa Mundial. The no-nonsense classic should be a staple in the locker of any self respecting centre-back. Except…it’s not. Only 3 players have taken their Copa Munidals to the actual Copa Mundial – for shame!

After sneaking onto our list of most popular goalkeepers football boots – The v1.08 once again shows up where it’s not expected! It’s ligtweight construction must appeal to defenders who like to really be on the heels of the man they’re marking.

The Speciali is clearly loved by the Anglicised, though – as all it’s wearers play their club football in England

It’s easy to see why Lotto’s FuerzaPura would be a favourite with defenders. The construction is aimed at producing power in kicks, making clearances satisfying to hit up field, and the Twist’n’go technology makes it easier on defenders to cope with agile attackers!

Another speed boot that gets a little representation in the back line is the Vapor V and the Superfly I. Proving that defenders don’t just opt for protective boots, the representation of the Vapor showcases the modern man at the back, who refuses to let spry strikers get the better of them for pace.

Just edging out it’s predecessor, the Superfly II has become a massive favourite with flying wing-backs and overlapping wide-players alike. It’s rigid Carbon Fibre construction makes it as tough in the tackle as many other bigger, more bulky football boots

The PowerCat 1.10 might surprise a lot of people for not being on more pairs of feet! The choice of several rough-and-tumble defenders at club football level, we were definitely shocked to find that Puma’s newest is only on 10 pairs of defenders feet. 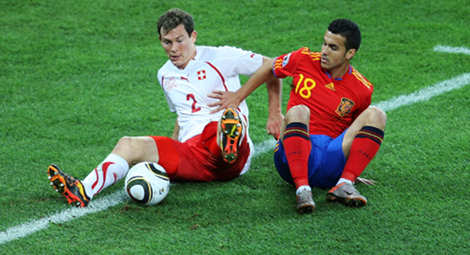 If the PowerCat‘s standing shocked you, then v1.10‘s is going to leave your jaw on the floor! Despite being a speed boot (and one of the less popular ones, at that) the v1.10 clocks in as the 7th most popular boot with defenders in this World Cup.

19 of the world’s finest defenders reckon the CTR360 is as good for stoic defenders as it is for creative midfielders.

The pass-pad is great for quickly shifting the play from defence to attack, and the KangaLite Pods are as good for absorbing impact as they are for taking the spin off of shaky passes.

Adidas’ newest rockets int0 5th place in this chart, and we can’t help but wonder how many of these players played in the adiZero’s predecessor football boots; the f50i, and how many people have jumped on the f50 bandwagon now that it can lay claim to the lightest boot in the World?

The adiPure III is definitely a boot that resonates with defenders the World over – players from 5 continents join under the adiPure’s banner – which is probably made of super-soft K-leather, too! 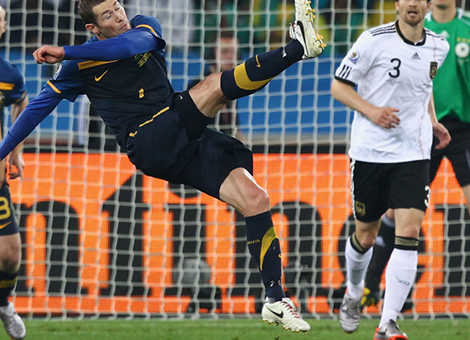 After impressively topping our list of boots that Goalkeepers wear earlier this week, it’s down to 3rd place for the Nike Football mainstay.

A boot that has long been associated with some of the World’s top defenders, it’s great to see the likes of Carlos Puyol and Ä‚€°ric Abidal keeping that tradition alive.

Originally designed to enhance deadly finishing, defenders have quickly seen the benefits that the adidas Predator series can bring to their game.

The latest incarnation’s PowerSpine technology prevents the foot from bending unnaturally when tackling an opponent as well as providing some added ‘oomph’ when getting the ball upfield.

The Nike T90 Laser III becoming the first choice for many of the World’s top defenders ultimately represents the shift in a defenders role in the modern game. Rather than just being a wall to stop the other team, it’s not the job of the best defenders to spread and control the play using pin-point accurate passing and crossing – which is one of the things the Laser III is best at!

Written By
Kyle Elliot
More from Kyle Elliot
A poll by adidas shows that 95% of youngsters would like to...
Read More