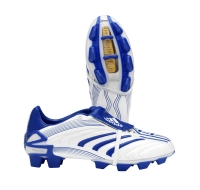 Hummel’s 8.4 Pio FGX is a limited edition lightweight football boot, only 2000 pairs have been produced worldwide. This football boot really seems to come into its own when we consider comfort. A unique feature of the Hummel nominated football boot is its hmlFIT Customised Fit Technology heat mouldable sockliner. This allows the wearer a customised fit, providing maximum surface contact with the foot, ensuring fewer pressure points, and improved performance and control. It’s asymmetric design aids anatomical fit and the lock-fit lacing system ensures the maximum un user comfort. Ajax’s Danish winger Dennis Rommedahl is one of Hummel’s leading endorsees. 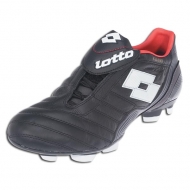 Lotto’s Vento KL II has the look of a traditional football boot, with a classic design, rich in technology and innovation. The upper is composed of water-repellent kangaroo leather and features an asymmetric lacing, which allows greater control, ensured by the larger surface area which is in contact with the ball. The Lotto Vento KL II uses the Italian boot brands’ Adapto system, SEC, Shock-off and BFC technologies which all contribute to improving comfort levels. An SBS quarter stiffener is placed at the back of the boot to cushion the heel anatomically and provide a dual adaptation and support action. SEC and Shock-off is a cushioning insert placed in the heel area of the boot. The BFC is a patented insole which favours and controls the natural flexibility of the foot and supports the arch and the elastic return of the forefoot. The Lotto Vento KL II is currently worn by Milan’s Clarence Seedorf and Villareal’s former Manchester United striker Giuseppe Rossi. 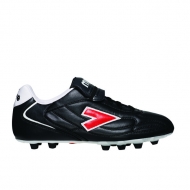 With its classic appearance, the Mitre Raptor may appeal to a more traditional type of player. The Mitre Raptor is made up of a low cut synthetic stitched upper to prevent stretching and give the wearer’s foot a secure, comfortable fit. The Raptor features the Mitre logo (red)on the side of the football boot and includes asymmetric lacing and an ultra secure fold over tongue. 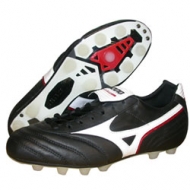 The product brief for the Mizuno Morelia was to create a football boot designed to improve player comfort, whilst also enhancing, touch, feel and flexibility. The upper is made of precision crafted supersoft waterproof kangaroo leather, with a flip over tongue. The multi stud pattern helps increase stability and traction. The Morelia is worn by Inter’s Javier Zanetti and Mizuno also count Romania’s Adrien Mutu and Argentinian Pablo Aimar amongst its endorsees. 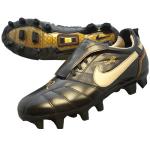 The Nike R10 Tiempo has been developed on the foundations of the popular Nike Air Legend football boot. This modern, yet traditionally styled football boot is built using soft kangaroo leather, with an improved outsole and a larger sweet spot. In developing the R10 Tiempo for Ronaldinho, Nike looked to design a football boot promoting speed, control, and also comfort. As such, the heel of the football boot is lined with a supple leather lining. The outsole offers midfoot and rear stability coupled with three distinct forefoot flex-groove areas for maximum comfort, control and flexibility. The full-length PEEVA sockliner with Poron inserts provides a low to ground feel, with great cushioning, plus a high-density EVA arch support.

The Prior 2 Lever Assassin is the world’s first fully customised football boot and for a price in excess of £6000 you would expect nothing less! The design process for each pair of Assassins is fairly rigorous and the finished product does look fairly impressive. Each football boot is made from scratch for each individual for both left and right foot. The Selective Laser Sintering (SLS) system allows very precise individual designs to be made, thus providing the ultimate in comfort if the wearer so desires. Studs may be moved and placed, intrinsic structures built to dissipate peak forces, heel raises added, changing in fit from left to right foot, as well as providing different outsoles at the same time.

The Puma v.106’s last and lace wrap system moulds the upper to the contours of your foot. The weight is reduced by the insertion carbon fibre plate, whilst adding improved pressure distribution. The outsole integrates with the anatomical stud positioning and pointed soft ground studs, designed to offer the best grip, manoeuvrability and rear foot stability. If control is paramount, then the thin upper offers a great deal of feel. England strikers Peter Crouch and Dean Ashton both wear the Puma v.106 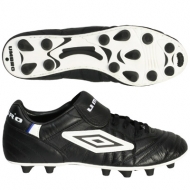 The Umbro Speciali has long been considered a classic footballers football boot. From appearing on the feet of Alan Shearer at the beginning of his career to being the boot of choice for a teenage Michael Owen, the Speciali has always enjoyed strong and loyal support from players. The Umbro Speciali ’07 continues to have flexibility and simplified comfort in an instant glove like fit. The soft kangaroo leather upper aids touch and comfort, having been designed to provide a ‘second skin’ fit. The Umbro Speciali ’07 is available in two separate soleplates making it adaptable to all conditions.

Remember if you haven’t voted already, vote now for your favourite football boots and give yourself a chance of winning the top prize of a signed pair of John Terry Umbro X Boot Destroyer’s, and a runner up prize of a pair of football boots each season for the next five seasons!