Boot-spotters have been asking us about Roque Santa Cruz a lot recently.

Manchester City’s Paraguayan hit-man has been wearing some pretty interesting Mizuno boots recently, but Mizuno have been tweaking and testing them to perfection, and as such, have been reluctant to tell us anything until they were ready.

And the great news is that, just in time for the World Cup, Mizuno have finally lifted the lid on their latest boot: the Wave Ignitus. The Wave Ignitus is essentially a Power boot – but as always with Mizuno, there’s a little more going on than you might first anticipate.

First of all is the quantification of this boot as a ‘Power’ boot – Mizuno incorporates a Carbon Fibre shank in the sole-plate, which decreases weight and increases stability (but then again, you knew that from just about every football boot that’s come out recently!) and also includes their universally-praised, weight-reducing Wave System in the Sole Plate, both are aspects that are normally associated with speed boots.

And second is the Wave Ignitus‘ real party piece, technology that Mizuno have dubbed ‘Mukaiten‘ 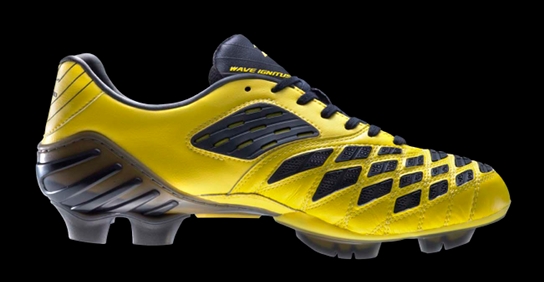 So, whereas every boot since the original 1994 Predator has sold us the benefits of spin, Mizuno are taking a big gamble and telling us that No-Spin is now the new hotness.

Mizuno claim that spin is actually a bad thing and that it effects accuracy, but that their new Mukaiten panels increase swerve without affecting accuracy.

So, essentially rather than the ball spinning to add swerve, these football boots use pure power to cause the ball to dip and swerve wildly, without giving the keeper the advantage of being able to judge the spin. 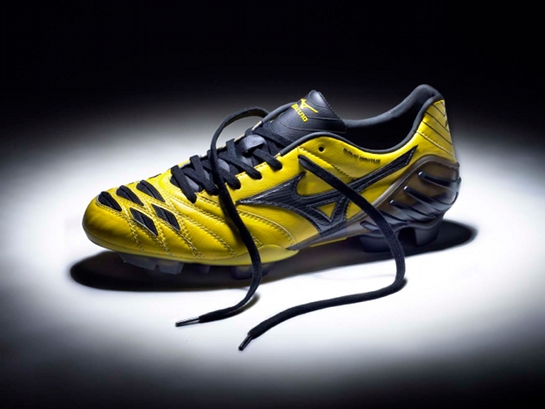 In addition to this intriguing innovation, Mizuno have brought all their best features to the table; including their high-grade Kangaroo leather (that some members of FB staff haven’t shut up about since testing the Wave Shinken II!) and a refined fit that’s dubbed ‘Dynamotion’ and is the spiritual successor to the Shinken fit.

Also for durability, there’s a three-strength Pebax heel counter, that’s designed to be flexible enough to allow quick turns and tricks, but is layered up to three times towards the sole – which gives it more density and strength.

All in all, we’re really impressed at Mizuno‘s handiwork here. They’re clearly not happy to sit back and let the big boys have all the glory and the Wave Ignitus is a guns-blazing entry into the World Cup Boot launches.

Look out for our review later this month!

Written By
Felipe
More from Felipe
Man Utd boss asks Uefa to review it's policy of refusing to...
Read More