After closing out 2013 with a couple of mighty fine Morelia Neo colourways, the Brand from Japan look to continue their hot streak with an absolutely delectable new look for their signature ‘power’ boot as they launch the Mizuno Wave Ignitus III – White / Navy / Bolt.

Looking to establish a distinctive on-pitch identity and visibility has delivered a bright and colourful start to life for the Wave Ignitus III. And as much as we love a crazy colourway, we’re thrilled to see the highly-rated Ignitus in a more orthodox colourway. 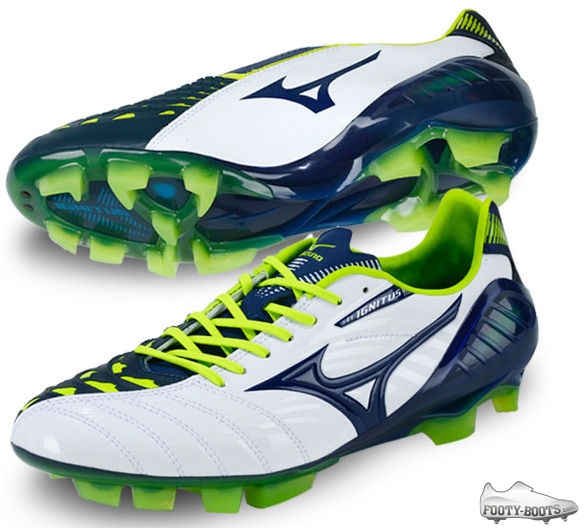 The pure white upper shows off the PrimeSkin upper’s qualities perfectly; Mizuno say this new synthetic provides a lot of the shaping and creasing qualities of K-leather, whilst repelling water and allowing the designers more freedom.

Speaking of which, the instep and vamp of the Mizuno Wave Ignitus III – White / Navy / Bolt' are picked out in Navy Blue and Volt, with the newly-installed striking elements looking as aggressive as ever.

Designed to offer three styles of strike, the Wave Ignitus III builds upon the success of the Mukaiten panel from the original Wave Ignitus which launched in 2010.

Once focusing on ‘no-spin’' Mizuno have extended the Wave Ignitus’ arsenal to also give the boot an advantage on side-spin and top-spin shots with the new striking elements on the front of the boot.

Throw in the continued use of the Wave technology soleplate and revamped stud system, and the Mizuno Wave Ignitus III' is likely a tantalising prospect for any dead-ball specialist.

Currently on sale in Asia with a European and North American retail date TBC, what do you think of the' Mizuno Wave Ignitus III – White / Navy / Bolt?

Written By
Kyle Elliot
More from Kyle Elliot
The final Weekend Review of the Premier League season looks back on...
Read More