Mizuno was founded in Osaka, Japan, in 1906 by Rihachi Mizuno. Although the Japanese sports brand is well known for its running, baseball and golfing products, Mizuno entered the football boot market in 1997, and its search for technological innovation has led to the design of some fairly impressive football boot offerings.

Although it doesn’t have the football history of Nike or Adidas, Mizuno counts Argentinian international Pablo Aimar and Romanian Adrian Mutu amongst its endorsed players. 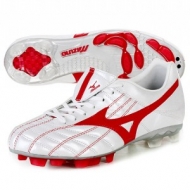 The first thing we noticed about the Mizuno Wave Ghost Striker was how light it was. Weighing in at 215 grams, compared to the Morelia Wave’s 250 grams, this is certainly Mizuno’s lightest football boot.

The Mizuno Wave Ghost Striker football boot, is made from washable kangaroo leather and features a microfibre synthetic upper. The leather is fairly flexible and the football boot fits well on the foot so don’t buy a pair expecting them to expand and stretch too much.

Mizuno have included compact wave plate technology in the heel to enhance cushioning, stability and balance whilst playing. The heel plate grips well and prevents your foot slipping in wet conditions. A removable sockliner is included.

The PU outsole is made of a multi stud unit, which the football boot brand developed in conjunction with top international players paying particular attention to improving traction.

At £79.99, the Mizuno Wave Ghost Striker is a top end offering from Mizuno. You can use it on soft and firm natural surfaces and it is available in studs and moulds, although we preferred the moulds. Mizuno certainly think it looks stylish, as they have nominated it in the Best Looking Football Boot category, in the Football Boot Awards.

Verdict: All in all the Mizuno Wave Ghost Striker is a pretty decent football boot; very light and flexible, with a good fit.

Written By
Felipe
More from Felipe
Ahead of the Gulf Cup of Nations, Footy Boots and the Goalkeeper...
Read More