If you’re a regular reader of Footy Boots then you’ll know that Mizuno football boots generally do well in our wear test reviews. The Wave Ghost continues that trend.'

Many of the lighter football boots on the market, aimed at increasing the speed, have had a bad rap recently for not offering much in the way of comfort. But after the improvements that Nike made to the Vapor line, the v1.10 being one the finest fitting boots PUMA have ever made and now Mizuno having put forward the Wave Ghost I think it’s time that stereotype is put to pasture.

The Wave Ghost is an excellent fitting football boot; the soleplate has a slight bend to it that caters to the natural curve of the foot, and Mizuno’s always excellent Wave system makes the heel very solid and light at the same time. 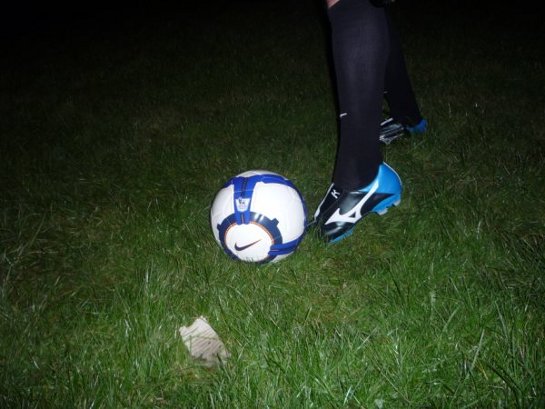 One feature that isn’t as impressive straight out of the box is the upper of the boot. For the synthetic leather upper Mizuno have teamed up with Tokyo-based material producers Kuraray. Whilst this specially-engineered upper is soft to the touch, it all bends as a unit, rather than creasing like natural leather on the first couple of wears. Thankfully, after a couple of games (especially in the wet) the upper soon finds some give and becomes all the better for it.

Another interesting feature of the Wave Ghost is the interchangeable sole-linings; one for ‘Performance’ and one for ‘Cushioning’. I didn’t find there was too much difference between them; as the football boots were pretty comfortable to begin with. But I imagine that if I were playing on harder ground or artificial grass I’d probably appreciate the extra padding that the ‘Cushion’ sole affords!

Again, I had the opportunity to try the football boots in 2 different sizes, 9.5 and 10. Once again, the 9.5 was a great fit for my normally size 10 feet. Due to the boot needing a little bit of breaking in, the smaller fit seemed to mould nicely to my feet and thus bend in all the right places, meaning they took less time to get to that ‘nicely worn’ phase. 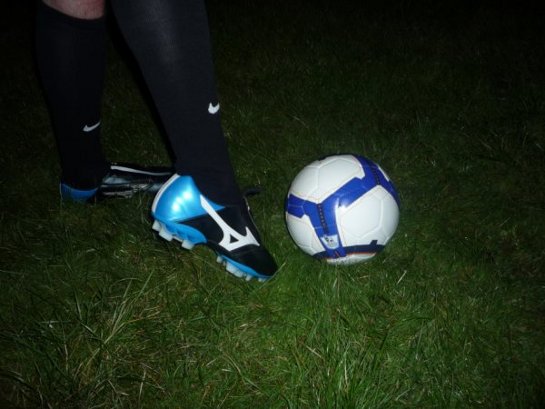 Leading on nicely from my last point, if there’s one thing the Ghost’s Kuraray Leather upper is, it’s tough as old boots (despite the obvious disadvantage of being reasonably new boots). Impact, scratching and moisture are nothing to this material; it can really take a beating!

Playing in the wet recently I’ve been really impressed by the waterproofing on the boot. In addition to this I was also pleasantly surprised by the streamlined shape and frictionless upper of the football boot somehow seem to stop as much mud sticking to the soleplate and upper. Whether this is a deliberate perk of the boot or just a pleasant side-effect, I’m not sure, but it’s certainly been useful these past few weeks! 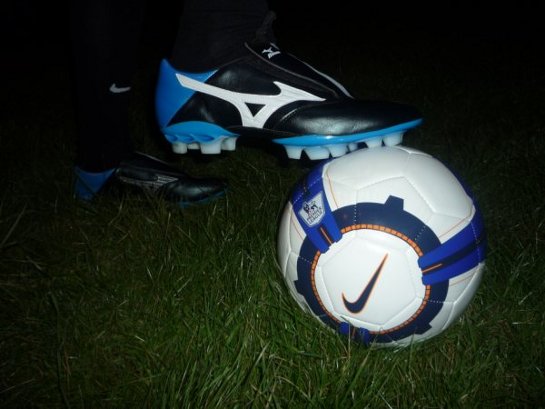 As mentioned before, the Wave Ghost’s upper is one that definitely gets better over time. Wearing them for the first time, you might find the upper near the toes a little unforgiving, especially when making contact with the ball at speed. Once worn in though, the football boots begin to crease across the top of the toes, bend in all the right areas, and generally start behaving like real leather.

The one feature that really caught my attention is the F50-esque velcro lace cover. As this is one part of the boot that doesn’t really bend, the synthetic leather that comprises the lace cover doesn’t really break in, but surprisingly this isn’t a bad thing; as this firm section of leather is covering the laces it is firm enough to cover the laces with no lumps or bumps, giving you a big smooth area (not entirely dissimilar to the F50.9 or, taken to the extreme, the Concave PT-1) that’s really nice for putting through the ball.

On the other hand, this area isn’t completely in line with the rest of the football boot, so rather than getting a nice, sock-like fit across the front and side of the ankle, it does lump up a little bit – so if you’re not fully concentrating you can end up not making the contact you desired when snapping in a cross with a defender on your heels!

Interestingly, maybe because it’s a smaller piece of material, the instep of the boot is an absolute joy to distribute passes from. As mentioned before, the football boot has a slight curve that follows the natural slope of the foot and a stiff-rubber Mizuno Logo (similar to the CTR360’s pass pad)'  so taking the sting off a pass and sliding it along the 18 yard box to your centre mid feels almost as gratifying as it does in Nike’s Maestri. 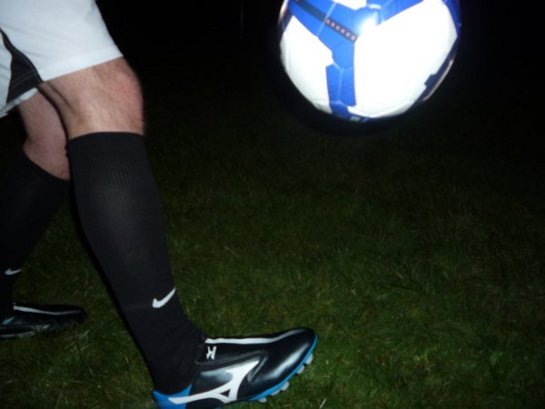 The Mizuno Wave Ghost is a football boot that takes a lot of influence from those who have gone before. Standing it next to the Mercurial Vapor IV or the adidas F50.9 the inspiration is clear. However, rather than be seen as a copycat or wannabe brand, Mizuno have put a lot of thought into which innovations to put onto the flashiest football boot in their line-up.

The Wave system has proven to be a big success for Mizuno across a variety of products. It’s great to see that it’s not just restricted to the Wave Shinken line for the sake of exclusivity to one of its products; it’s a really exciting prospect to see some systems making the leap from one product to another (can you imagine if adidas offered an upper for the F50i that had a Predator’s Powerspine?).

Whilst the upper isn’t a complete success, (I’d maybe liked to have seen that awesome thin K-leather from the Wave Shinken II!) it does wear in well for a synthetic upper, and competes with the uppers of the older F50’s and the v1.10’s new synthetic leather upper, but with more grip thanks to really doing it’s best to imitate leather.

All in all, the Mizuno Wave Ghost is a tremendous football boot for anyone that wants something aside from the usual suspects. It’s remarkably tough for a ‘speed’ model, has a great striking area and is superb for passing. The upper is strong and durable, and will give you more grip and a better feel than the more ‘laminated’ speed boot uppers. If you’ve got a little bit of time to give the boots a run out across a couple of training sessions before a full 90 in them, these football boots have got a lot to give in return.

Written By
Felipe
More from Felipe
Wigan grab a crucial win to leave Birmingham just above the drop...
Read More