The second of Mizuno’s big releases for the new season is the new Mizuno Supersonic Wave! 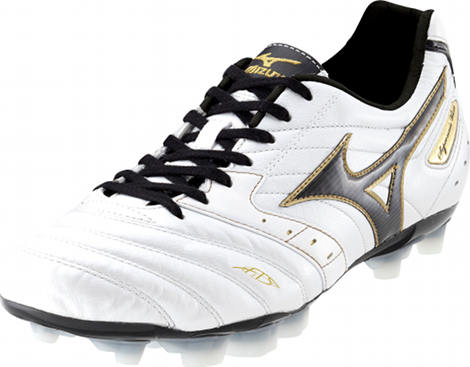 Definitely a smart looking boot in it’s launch Pearl/Gold/Black colourway, the Mizuno Supersonic Wave is a football boot based around the philosophy of Control at High Speed.

To assist in this Mizuno have developed an innovative new Feather Touch System (FTS) that employs low rebound sponge on the forefoot to aid ball control while dribbling at speed.

Structural overlays in the upper secure the foot whilst changing direction at pace, providing all-important confidence during high pressure situations on the field.

The idea being, that the slightly spongy upper gives optimum feel for the ball at pace – which is very interesting given that other speed football boots such as the Superfly II and the adidas F50 adiZero traditionally have very thin uppers with nothing inbetween a players foot and the ball. 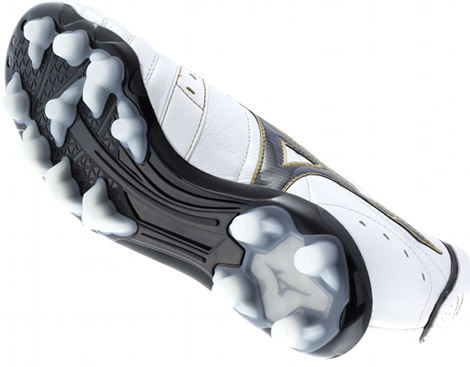 Mizuno say that the Supersonic Wave uses their most innovative outsole yet Ĺ› weighing in at only 215 grams (only 5 grammes heavier than the new Mizuno Morelia Ultra Light!) and maximising flexibility, stability and traction.

The ultra-technical boot design is combined with the highest grade kangaroo leather and suede collar lining to create the perfect fit, allowing the SuperSonic Wave to deliver supreme control and support combined with optimum comfort.

Mizuno˘ trademark Wave configuration in the heel enhances stability and cushioning, while dual density studs create uncompromising comfort no matter how hard the ground may be.

As previously mentioned, the Supersonic Wave is a mere 215g, and has a price tag bang on £100 – combine this with it’s smart and deadly look and we think the Far-Eastern brand could have a real winner on their hands here!
What do you reckon? Hit up the boot-o-meter below to let the world know what you think of these football boots!

MIZUNO SUPERSONIC WAVE, 9.5 out of 10 based on 37 ratings https://www.footy-boots.com/wp-content/uploads/2010/09/MIZUNO-SUPERSONIC-WAVE.jpg