As the Olympic games appear ever-larger on the horizon, Mizuno have launched their ‘Seiei’ campaign, to celebrate those single, defining moments in an athletes career.

Japanese for ‘Elite’, the Mizuno Seiei campaign is Mizuno’s largest campaign to date, and brings in athletes from all disciplines to talk about what it takes in their sport to be truly elite.

Given Mizuno’s lengthy presence in sports like handball, and a reputation for class-leading running shoes, it’s great to see that Mizuno are giving their football products the same platform as some of their other, more established lines as their own football boots develop a strong hold in the marketplace. 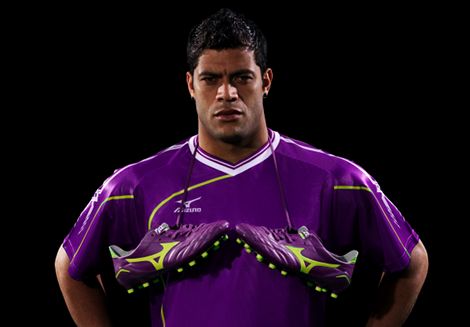 As an over-age member of the Brazilian Men’s Olympic football team, Hulk is the natural choice to lead the Mizuno football campaign.

In this video he talks about his best attributes, displaying them on a deserted training pitch, before hammering a volley home in his Mizuno Morelia Neo‘s – the boot that has been elected by Mizuno to represent football in the elite Seiei collection.

As companies like Nike, Umbro and Puma have been giving their cross-category footwear a ‘unified’ look (Clash Collection, St. George’s and evoSPEED), Mizuno have also gone down the same route – with all their ‘Seiei’ footwear boasting a distinctive Purple / Luminescence Yellow colourscheme.

The dominant purple colourway of the Seiei collection is historically associated with first rankmembers of Japanese society – providing Mizuno with a befitting colour to associate with the elite status of their athletes.

The luminescence yellow represents energy in modern Japanese culture and will express the energy radiated by Mizuno’s elite athletes in competition this summer.

With a new campaign and the launch of the Supersonic Wave 3, Mizuno are on great form at the moment –  all we need now is for Hulk to move tot he Premier League and they’ll really be set for a barn-storming 2012-13 season!