After an excellent 2010 which saw the release of the Wave Ignitus, Supersonic Wave and Morelia Ultralight, Mizuno have been relatively quiet so far in 2011 in the football boots market. 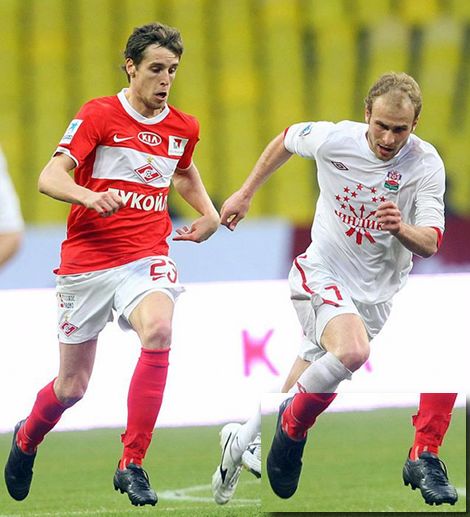 But that’s not to say the Japanese brand are resting on their laurels, as we’ve come across some great photos of a brand new type of Mizuno football boots in testing in the Russian Premier league.

During the Spartak Moscow Vs Spartak Nalchik, both of'  Moscow’s Kombarov twins played out the match in a black-out pair of Mizuno football boots.

Both players have been dedicated Morelia wearers this season, opting for the legendary cleats’ comfort and touch – but due to the lack of fold-over tongue, it’s safe to say that these aren’t simply a new Morelia.

But that’s about all we can say about these mystery Mizunos, thanks to the excellent black-out work done by the Japanese brand.

What little detail we can salvage, is the matte upper and lateral stitching would suggest a leather upper, and the central lacing system is fairly narrow for the usually-wide Mizuno. 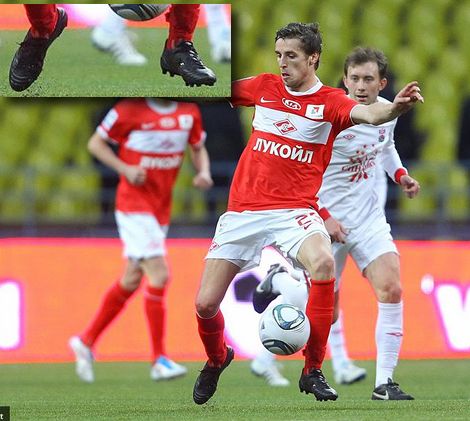 Another point of interest is the heel counter, which looks to be far more substantial than any of Mizuno’s current range (bar the Wave Ignitus), and the soleplate suggests larger heel blades, with more low profile blades under the forefoot.

Couple this with the new Wave Ignitus II that we saw Keisuke Honda testing in the International break, and it seems that Mizuno are working really hard behind the scenes to give us football boots fans plenty to look forward to!

All in all, we’re very confused by this potential new release from Mizuno! We know that a new the Wave Ignitus II is coming, the Supersonic Wave is still relatively new and the Morelia isn’t likely to change any time soon; so that’s their Power, Speed & Heritage lines filled, respectively!

What do you think these new Mizuno football boots are likely to be?

Written By
Kyle Elliot
More from Kyle Elliot
Manchester United are back once again to take the Premier League by...
Read More