Mizuno have something of a chequered past when it comes to lightweight, speed football boots – whilst they’re comfortably creating boots under the 200g weight range now, for every outstanding Morelia Neo today there was a less favourable release like the Wave Ghost that preceded it.

But since launching the Wave Ignitus in 2010, Mizuno have had the midas touch, with more or less everything they’ve released being received well. Here in 2014 , their major new silo for the World Cup was the Basara, with the TC-001 the premier model.

On paper the Mizuno Basara has all the ingredients to make be great boot – but does it pull it all together to make a cohesive boot worthy of elite play? Let’s find out!

Slipping on the Basara for the first time is almost unnervingly good. The Primeskin upper is incredibly soft to the touch, the heel counter is supportive without creating hotspots and and the lacing system is one of the deepest you’ll find on any football boot around at the moment, making for a completely bespoke fit.

We’d be really shocked if anyone struggled with the Basara TC-001 after even just a couple of hours break in. 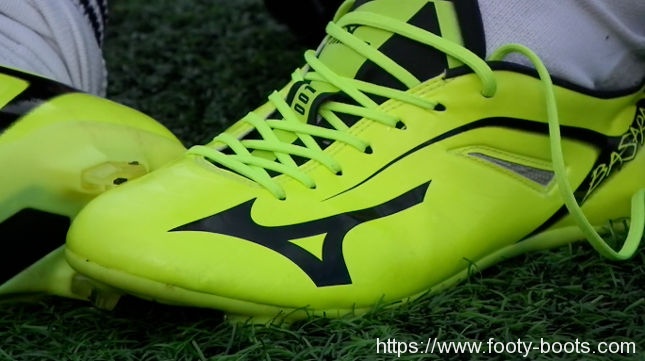 The Primeskin upper on the Basara is also the source of the great feel and touch on the ball provided by the boot.

We’re fairly skeptical of a synthetic upper as smooth as the one found here on the Mizuno Basara, but Mizuno have engineered the boot in such a way so that a lack of friction is never a problem – again, that deep lacing system allows the boot to be pulled snug to the foot, and that’s a big factor in that.

A lot of people have a pie-in-the-sky idea of a leather speed boot being the holy grail of cleat design – and whilst we’re not sure the Basara could ever top that ideal many players have, the Primeskin upper is soft, supple and stretch resistant enough to come pretty close. 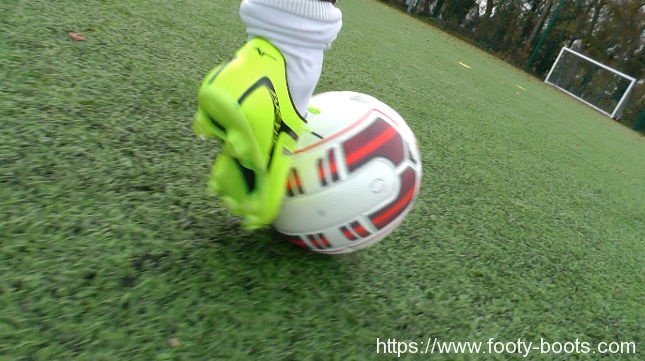 Performance wise, there’s a lot to love about the Mizuno Basara in addition to that silky touch on the ball. Mizuno’s tagline for the Basara is ‘Savage Acceleration’ and there’s a couple of key pieces of tech that aim to help with that.

The idea being when a player is planting his or her foot when sprinting or cutting the boot allows the foot to dictate how much of the boot is in contact with the turf, and seeing as the body will naturally look to get as much of it’s surface area as flat as possible, this means more studs are able to provide traction – more traction = better acceleration. 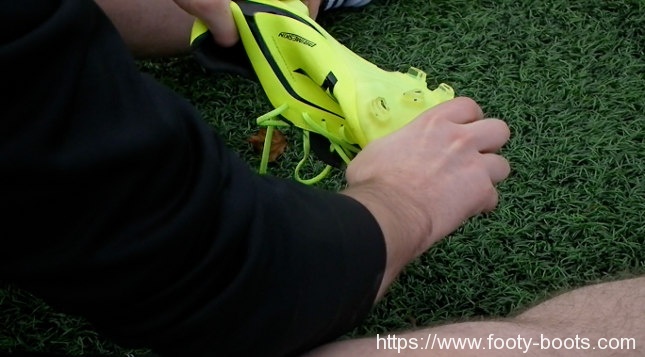 Whilst this is something that’s touch to quantify, it is easy to say that the Basara provides a comfortable, super-responsive ride, and even though we’ve been playing on pitches that are far from perfect at this time of year, they haven’t let us down yet.

Contributing to that is the R-Fibre inner liner. Depite looking like some kind of glass fibre composite in that little window on the side of the boot, the truth is it’s more like a super soft web.

However, Mizuno say this in-house development is incredibly strong, and reduces excess stretching by adsorbing some of the force created by the foot on the upper to lock the foot in place when turning and sprinting. Think of it like a seatbelt that ensures your foot is always locked in for optimum energy transfer. 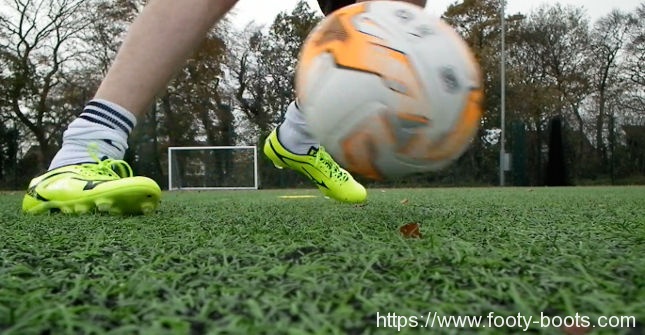 Bolstering that notion of complete lockdown, Mizuno even include an extra set of insoles that use the same ZeroGlide lining as the heel counter. Acting a little like Trusox, we found ourselves really liking these additional insoles even though they’re a little thinner than the ‘standard’ ones.

As these technologies make the boot feel very unified with the foot, you may well guess that the Basara is good to strike a ball in, too. Well, yes and no.

Close to goal, the Basara feels King. That true sense of lockdown was great for adding the confidence to put a little more power into short-range strikes, whilst that soft, thin upper was lovely for dinks and chips. 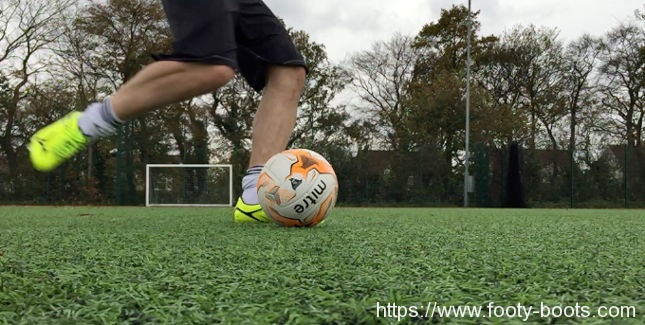 As you move further away, that supple, responsive soleplate made it feel like we were losing just a little bit of ‘ping’ in our shots at distance, and the central lacing isn’t our personal preference for long-range efforts, but your mileage will vary on this depending on your personal style.

But that point is only one on a very short list of complaints with the Mizuno Basara TC 001. Our other would be that the studs are pretty long, meaning we’d say stick to the grass with these – don’t go hurting yourself using them for a game on artificial turf.

Overall, Mizuno have pulled a blinder on the top-end Basara; comfortable, versatile in the fit stakes with a lock down feel on foot and a features that take the boot up a level rather than peg it back.

Written By
Kyle Elliot
More from Kyle Elliot
We take look at all the new gear on show in the...
Read More