When the creators of Twitter first came up with the concept of 140-character micro-blogging, we’d have to guess they had no idea it would become so intrinsically linked with football. 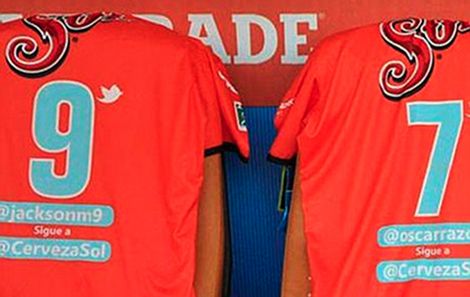 From club-wide bans to the latest Joey Barton outburst, few sports have taken on Twitter as their own like the beautiful game – for better or worse.

Now, Mexican club Club de FÄ‚Ĺźtbol Jaguares de Chiapas (who will be referred to for the rest of this article as Los Jaguares) have really taken Twitter to the next level, by replacing the traditional names of the players on the back of club shirts with their twitter handles! 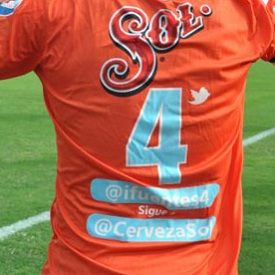 In a genius move by Los Jaguares and sponsor Sol – who also get a namecheck in the form of @CervezaSol under the player’s names – the club are hoping to boost their social media presence with this move, as well as establishing themselves as modern and forward-thinking.

‘Conscious of the age we live in, where we can all stay in touch through the Internet no matter how distant, Jaguar launched a campaign and carried out various activities linked to Twitter,„said a statement from the club.

‘In football as in life, 140 characters are enough to decide which side you’re on,’ the club added. But while the decision to put the player’s Twitter handles on the shirt is a unique development, Jaguares are not the first team to take the social networking site onto the pitch with them.

Whilst we did see prolific Tweeter Darren Bent have his Umbro football boots embroidered with his Twitter name, having a team-wide initiative like this is definitely a first in just about any club.

Can you see any of the teams in the Premier League adopting such a forward-thinking policy?

Will it be a lesser-fancied club like Norwich or Swansea? Or will Social Media savvy giants like Manchester United or City be the first to make such an audacious move?

Written By
Felipe
More from Felipe
Cristiano Ronaldo takes the Nike speed test in this video, so can...
Read More