A speedy thief has broken into adidas’ headquarters in Germany and stolen some of adidas’ top athletes new adiZero footwear – including Lionel Messi’s new adiZero Primes!

As you can see from this video, the sultry burglar sprints into 3 Stripes HQ,'  snatches the full range of adiZero gear and does a runner before they can be stopped!

Chief among the items stolen are Lionel Messi’s new football boots, the Warning Orange adiZero Prime, which sit top of the pile of stolen goods.

Now adidas and Messi himself are appealing to football fans across the world to ‘Find Them Fast’. 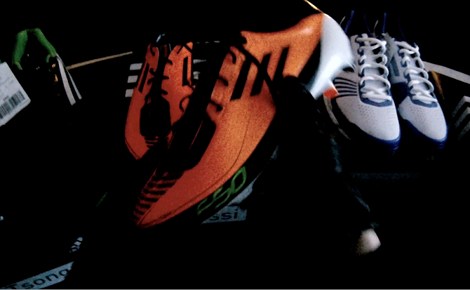 Messi is due to wear the new adiZero Prime for the first time on January 16th when Barcelona take on Malaga, but the Prime’s debut is currently in jeopardy if the masterful Argentine can’t get his football boots back!

Now, suspending belief for a second that adidas must have hundreds, if not thousands, of new football boots that Messi could wear, you can definitely colour us intrigued as to how all this will build up to the big debut of the world’s lightest football boots.

adidas are keeping tight-lipped on how all this will build up to the big reveal, but we’re being told to keep a very close eye on Barcelona, and that Messi might be getting some assistance from football fans in Barcelona in some very unexpected ways!

We’ll keep you updated with information as we get it!