Following on from a new Nike boot being spotted on the feet of Santos’ Ganso, it looks like adidas, too, are in the early prototype stages of testing a new boot, as Leo Messi is spotted carrying a pair of blacked-out football boots in training this week. 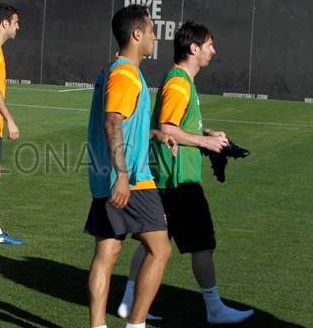 Whilst all of adidas’ attention has been squarely focused on the launch of the new Predator LZ, it looks like the three stripes were also quietly slipping out the first prototype of a new version of the ubiquitously-popular F50 adiZero range.

With the adiPure and Predator lines both having' received' an update to their ranks in 2012 (with the new 11pro and LZ), it’s not too big of surprise to see that adidas are already hard at work getting elite player feedback on their next generation of speed boots.

We know that Leo Messi is one of the key inspirations behind the adiZero' range, and has always been amongst the first to test the new F50 range whenever adidas have had something on the horizon.

Interestingly, with the most recent adiZero miCoach having landed 6 months ago, we think there could be three possibilities to what Messi has in his hands in that image.

1) A genuine, fully-fledged next generation adiZero that won’t land until 2012.

2) A mid-lifespan update; a revamped design to the same boot – as adidas did with the ‘standard’ F50' when they launched the adiZero Prime.

3) A Messi signature model – designed to his personal specifications. Similar to the old Ronaldinho Tiempo range.

We’ll leave the decision in your hands; which do you think it is? Or have you got another suggestion?

We’d love to hear it!

Thanks to the eagle-eyed DDChile for sending this in on our Facebook page!

Written By
Kyle Elliot
More from Kyle Elliot
Under Armour enter the Speed boot contest with the Blur Pro. But...
Read More