Lionel Messi has rounded off a sensational year by being named Fifa World Footballer of the Year.

Beating off the challenge of Cristiano Ronaldo, Xavi, Kaka and Andres Iniesta, Messi added the Fifa accolade to the Ballon d’Or he won at the beginning of the month. 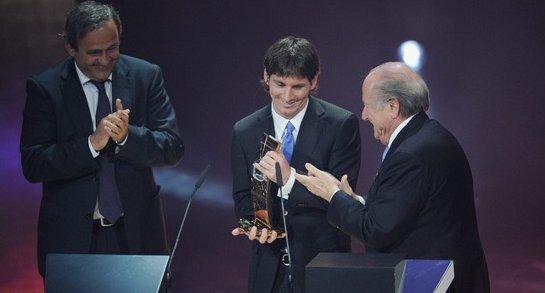 He becomes the first Argentine player to win the prize having amassed 1073 votes from captain’s and head coaches around the world. Ronaldo got 352 votes, Xavi 196, Kaka 190 and Iniesta 134.

Over the past 12 months, Messi helped Barcelona collect a mountain of silverware including an unprecedented treble of Champions League, La Liga and Spanish Cup last season, scoring the second goal in their 2-0 win over Manchester United in Rome in May.

This season the Catalan club has added the Spanish Super Cup, European Super Cup and Club World Cup to their roll of honour, beating Argentine side Estudiantes in Abu Dhabi to complete a stellar year.

After picking up his trophy, Messi said:

A magnificent year for me and Barca has ended in the best way.

Meanwhile, John Terry and Steven Gerrard were named in the FIFPro World XI, voted for by their fellow professionals.

Cristiano Ronaldo won the inaugural Fifa Puskas Award for the best goal of the year for his stunning 40-yard strike while playing for Manchester United against FC Porto in the quarter-finals of the Champions League in April.

Written By
Felipe
More from Felipe
Umbro X Boot III, the ‘strikers’ football boot. Following on from the...
Read More