We teased it last month, and now we’ve finally been given the green light to show it – Pepsi Max’s latest TV ad looks (and sounds) the business as some of the biggest stars on plant football attempt to quench their thirst!

As we said last time out – whilst big flashy ads from billion dollar beverage companies shouldn’t be cool, Pepsi always seem to find a way to make theirs worth watching again and again.

Whether it’s the 2010 World Cup ad that sees some of their biggest stars head to Africa or the classic Beckham vs. Roberto Carlos Spaghetti Western TV Spot from nearly a decade ago – they’re always good fun, if nothing else. 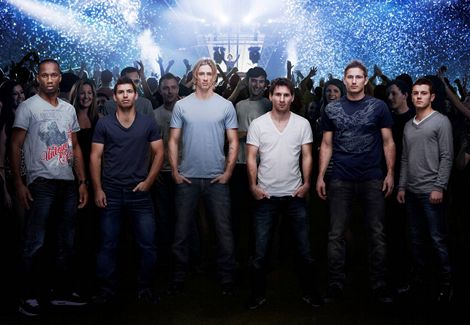 ‘‘Crowd Surfing’ sees the Pepsi MAX footballers at an outdoor beach festival where thousands of music fans are dancing and partying in front of Calvin Harris who is performing on an enormous raised stage.

Before the players know it, Calvin fires a football in their direction and a stunning game full of acrobatic skill and agility is underway. Whether it is Drogba using the strength of the crowd to catapult him high into the air and execute a stunning bicycle kick or Wilshere sliding along the crowd’s hands to make a tackle, everyone is getting involved.

Lionel Messi commented on the new advert saying: “I had so much fun shooting the new Pepsi advert, as I always do. I must admit, I never thought I would play a game of football whilst crowd surfing on people’s hands but that is what’s great about Pepsi, they always add a fun twist to their adverts. I think people are going to be saying “how did they do that?”

Unlike Leo, we won’t leave you hangin’ – as we’ve managed to snag an exclusive ‘Behind the Scenes’ clip, which you can watch above, and find out exactly how your favourite players pulled off those superhuman flips, tricks and kicks.

Written By
Kyle Elliot
More from Kyle Elliot
PUMA cap off the signature Tricks series with a tidy pair of...
Read More