After last year’s stirling white and gold effort, the whole boot community was left wondering whether adidas would be celebrating Lionel Messi’s incredible fourth consecutive FIFA World Player of the Year award with another pair of Ballon D’or boots.

The answer is an emphatic ‘Yes’, and this year they’ve pulled out all the stops. 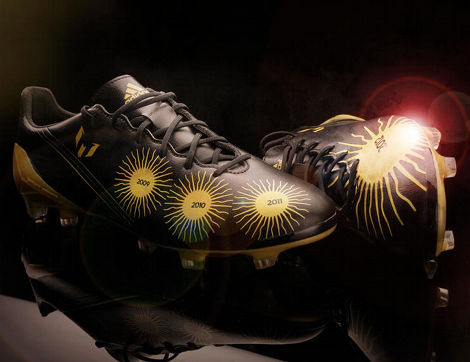 Whilst last year’s effort were partially plugging the miadidas service, adidas obviously felt they’d done enough of that in November, and this year they’ve plumped for a truly spectacular design.

Each of the Messi’s Ballon D’or victories are recognised inside sun graphics on the boot’s upper. The sun – which of course is at the heart of the Argentine flag – varies in size, with three smaller suns on the right boot balanced by a singular larger sun on the left which, of course, represents Messi’s most recent individual honour.

Built off the most recent adiZero, Messi’s Balloon d’Or F50’s feature a golden Sprintframe and adidas branding, with Messi’s signature logo added to the flank of each boot, just under the collar. 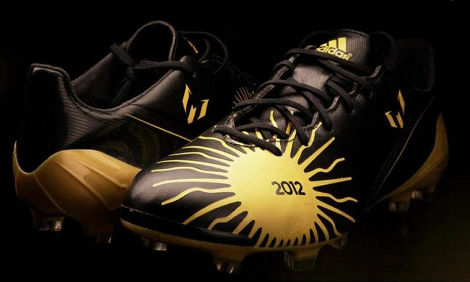 Where can you get a pair? Well, you can’t, officially. adidas have no plans to bring these boots to retail at present – however, @adidasfootball will be working with the new @TeamMessi account on Twitter to make sure these limited-run boots are given fitting homes by running competitions to win a pair – So go get following to be in with a chance!

What do you think of Leo Messi’s special edition boots?

Written By
Kyle Elliot
More from Kyle Elliot
Relive some of the classic yellow shirts of years gone by with...
Read More