Since the reveal of the Leo Messi adidas F50 adiZero' nowhere has been safe from the adidas/Messi one-two punch as they’ve launched trailblazing Twitter campaigns, competitions and digital experiences like the Messi Matrix. 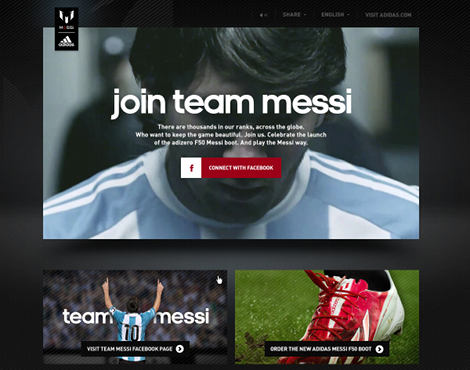 Now, it’s Facebook’s turn to get something Messi-centric from the three stripes, as adidas have put together a one-of-a-kind app for fans to get closer than ever to the' Argentine' superstar.

By joining Team Messi„on Facebook fans will be able to star alongside the world's best player in an interactive film personalised to the user through Facebook Connect. The innovative application represents a first for a football player, and makes use of pioneering 3D flash technology and filming techniques.

The film is personalised to you from the opening scene, giving you a tailored experience to mark your entry to Team Messi„on Facebook; something that’s a first for Facebook Connect.

The experience features three interactive moments, each allowing you to dictate which journey you take through the film with Leo Messi.

These moments mark a further technological milestone ” adidas being the first brand in the world to use this 3D flash technology online.

Once fans have lived their Team Messi„experience they can share a short trailer of their film, containing a piece of the personalised content, with their friends on Facebook.

If you fancy a go yourself (we’ve tried it and have to admit, it’s pretty cool) then the experience is available on Facebook via' http://a.did.as/WJufN0

Written By
Kyle Elliot
More from Kyle Elliot
Pepsi gear up for a big summer of football, revealing an incredible...
Read More