After catching a look at them on the feet of Xavi late last year, it seems that adidas are rolling our another prototype of the 2014 adidas Predator for testing.

Given that they’re on the feet of Arsenal’s resident BFG Per Mertesacker, there’s no way we could have missed them in use at the Gunner’s training complex!

That said, we’re still grateful for Lukas Podolski making sure the cameraman got a great shot of them – and we’re sure adidas won’t mind the publicity ahead of one of the most hotly anticipated releases of the year. 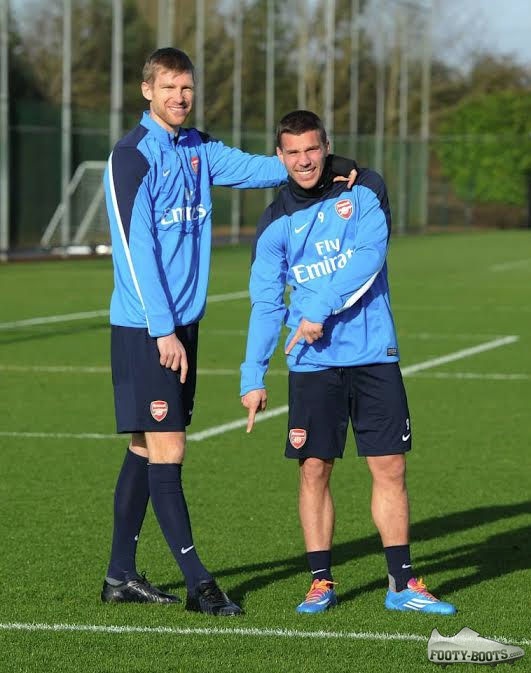 Marking twenty years since the adidas Predator turned how football boots were marketed and designed on their head, adidas will be rolling out a new version in time for the World Cup.

Details are – of course – scarce ahead of release, with a couple of codenames being thrown around (but just ask the Predator ‘D5’ what can happen to those!) as well as some purported leaked images.

However, what we can see from these photos and Xavi’s previous run-out in the 2014 adidas Predator is what looks to be an aggressive set of zones across the toe, instep and lateral sides of the boot.

Given adidas’ pride at implementing multiple Predator ‘elements’ on the Lethal Zones, it’s fair to say they’re sticking with a similar concept here – however, we don’t think adidas will be messaging them as another entry to the ‘LZ’ name, with a new name likely for maximum impact at the World Cup this summer.

Expect more details as we get them, building up to what will surely be a massive summer release!

Special Thanks to DDChile for sending in the spot!