Whilst the development of the Mercurial Vapor VIII has hardly been a secret, Nike have done an admirable job of keeping the upcoming ‘speed’ football boot’s colourways under wraps. But Marco Boriello might have given us a sneak-peek at what’s to come when the new Vapors launch. 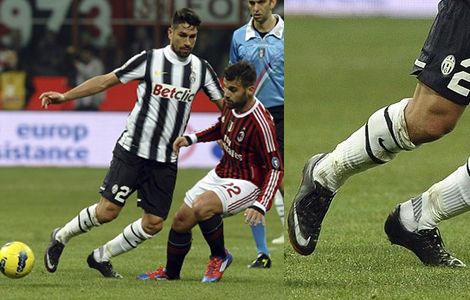 Playing against former club AC Milan, the on-loan Juventus man turned out in a pair of blacked-out Mercurial Vapor VIII‘s – which is not unusual, given the sheer volume of football stars we’ve seen testing the upcoming speed cleats.

However, the often-controversial forward’s boots also featured a white Nike tick, a detail that is usually missing from ‘prototype’ pairs – to draw less attention to a boot that is still ‘in development’.

Whilst many players have been testing out the Vapor VIII‘s soleplate with a Superfly III’s upper, this Black/White colourway definitely prompted closer inspection from the Footy-Boots.com stable of boot-spotters.

Just as we were getting all excited at the prospect of a return to the EC08 ‘Black Pack’ Vapors, further investigation on Borriello’s boots yielded that some of the Black paint had begun to flake away from the boot, revealing another colour entirely.

Towards the toe and instep, the Juventus striker’s boots look to be an Orange-Pink-ish colour that that Footy-Boots.com staffers have begrudgingly called ‘Salmon’.

Having launched the last handful of Mercurials in a everything from Purple to Orange, it certainly wouldn’t surprise us to see Nike opt for another colour that’s like nothing else on the pitch – and Salmon certainly fits the bill!

We won’t have to wait very long to see if this is indeed the launch colourway, as Nike are due to make a Mercurial Vapor VIII-related announcement sooner rather than later. Of course, you’ll hear it first on Footy-Boots.com!