Nike went all out for the Korean launch of the Mercurial Vapor IX late last week, as they took to the streets of Seoul in explosive fashion to announce the arrival of their latest speed football boots. 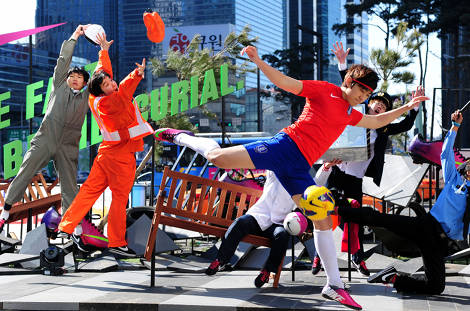 Descending upon the stylish Gangnam district of the South Korean capital (yes, that Gangnam) Nike created footballing' pandemonium' at the intersection outside the district’s busiest metro-station.

In a multi-faceted Mercurial experience, Nike demonstrated the explosive speed of the Mercurial Vapor IX' with a number of incredible interactive experiences. 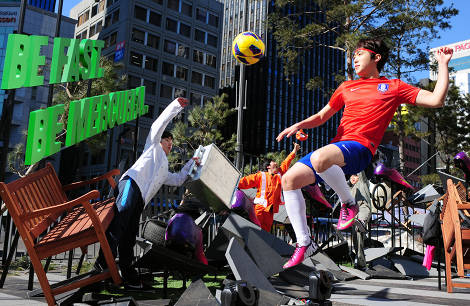 The area – which is open until February 23rd – is home to an installation inspired by the ‘Vapor Trail‘ ad starring Cristiano Ronaldo, with the new Vapors seemingly tearing through the area, displacing benches, bicycles and even people!

Alongside the installation is the chance for passeres-by to ‘Be Mercurial’, with a speed-zone challenge set up for prospective players to test their close-control and explosive speed in the Mercurial Vapor IX. As a bonus, every player gets their skills recorded on the big screen, and to share via social media – the fastest player of the day even gets to take home a new pair of Vapor IX‘s! 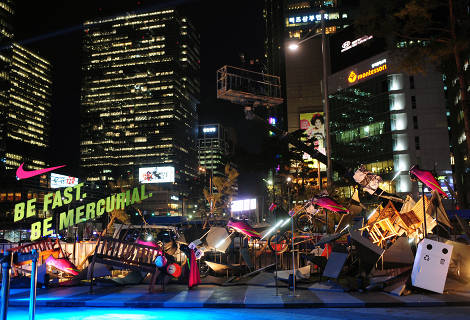 Depending on the time of day, there’s even a chance to get caught up in a footballing flash-mob, as 22 players will occasionally emerge from the nearby Nike store.

Dressed in full South Korea and Brazil kits, the teams break out into a full football match heading towards the Mercurial launch area,' where a martial arts team costumed as policemen and other participants from the Vapor Trail film joined out of nowhere. A culmination of music and a simultaneous performance of these two different teams came to an explosive end on the big screen at the exhibit.