Now here’s a curious occurrence – Allow us to introduce the Mercurial Vapor VI Elite…Sort of!

Nike have launched the Mercurial Vapor VI in a colourway that makes it fit in with the rest of their Elite Series of Football boots.

However, the Mach Purple/Total Orange Vapor VI‘s contain no technical advantages over any other Mercurial Vapor VI‘s out there. 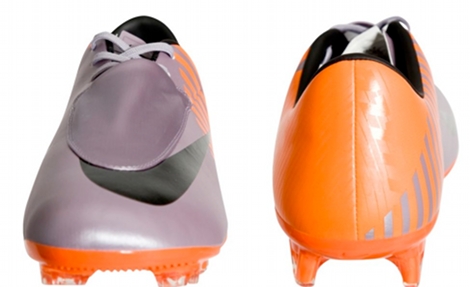 That’s right – despite being coloured up to fit in with the rest of Nike’s World Cup Football Boots, these Vapors haven’t been subjected to the Nike Elite Series treatment. Meaning there is no light-weight construction or weight reduction.

Presumably, this means that players like Nani of Portugal who prefer the standard Vapor to the Superfly II can play in their boot of choice and still fit in with the rest of the Nike players on the pitch!

We think this is a very interesting move by Nike, as it makes the Elite Series a little more accessible to most people. At the end of the day, players are getting a top-spec boot in the high-visibility World Cup Colourway for the same price as they would normally pay for the boot.

However, we’re a little bit upset that they didn’t make an Elite Series version of the Mercurial Vapor VI, complete with lightweight construction and maybe some Mercurial Vapor V-inspired Flywire in the upper.

As for the boot itself, we know that the Nike Mercurial Vapor VI features a re-engineered upper, designed to be comfortable, flexible and offer control at high speed.

The boot is also built upon a glass-fibre chassis. Whilst not as light as carbon fibre, this glass fibre is every bit as strong and easily engineered. Meaning that Nike can stiffen it it places like the arch of the foot, but make it bend with the toes for natural movement of the foot.