The newly named Nike Mercurial Glide is the sibling football boot to the Mercurial Vapor VI. 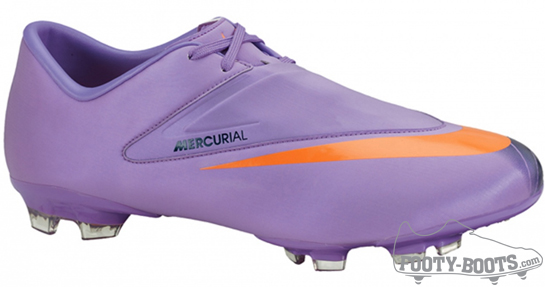 Sibling football boots often take many of the aesthetic qualities of more expensive boots in their range and offer them at an affordable price.

So – what can we expect from the Mercurial Glide?

Well, the Mercurial Glide offers a lightweight synthetic upper, not dissimilar to the Teijin synthetic used on the Vapor, Superfly and Miracle ranges.

Another neat feature of the Glide is the low-profile lace cover that’s been heat-sealed and branded in a different manner to the Vapor VI – oddly enough, a lot of us here at Footy-Boots.com actually prefer this version of the lace cover!

One feature unique in the Mercurial Glide’s design is the two-part outsole, – The heel section is elaborated with glass-fibre effect in addition to its TPU, and the toe-end of the boot has a nice angular feel to it, making it easy to execute quick turns.

In addition to a solid outsole, the Mercurial Glide also features and internal heel counter (like the Vapor) to ensure stability when running and striking the ball – and features a padded ‘collar’ around the top of the boot, ensuring they’re comfortable to wear.

And despite the disadvantages of not having any fancy materials in the Sole Plate, Nike have still managed to get the whole football boot to weigh in at just 260g!

Written By
Felipe
More from Felipe
Alex Ferguson is hoping Nemanja Vidic has not suffered a serious knee...
Read More