“Cristiano Ronaldo is a big hero for me and one day I hope to reach that level.”

There’s no doubting the ambition of Memphis Depay. The Dutch winger who will be plying his trade for Manchester United next term is very focused:

“I believe I can be one of the best players in the world and I have to dream and believe to achieve. It is tattooed on my chest.” Memphis has the motto ‘Dream Chaser’ tattooed across his chest.

We’re at the launch of the new Under Armour SpeedForm football boot. Memphis is the new face of Under Armour football, having signed in February to wear the boots of the American brand.

Work Every Day on Your Dreams

At just 21, Memphis’ focus looks to be paying off so far. He won the title in his last season with PSV and topped the league goalscoring charts. That was on the back of the World Cup 2014 in which he became the youngest Dutchman, ever, to score in the World Cup finals.

“You have to work every day on your dreams,” Memphis said. “My dream started with going to the World Cup and when I was there I scored two goals, becoming the youngest ever Dutch goalscorer and I was very happy.” 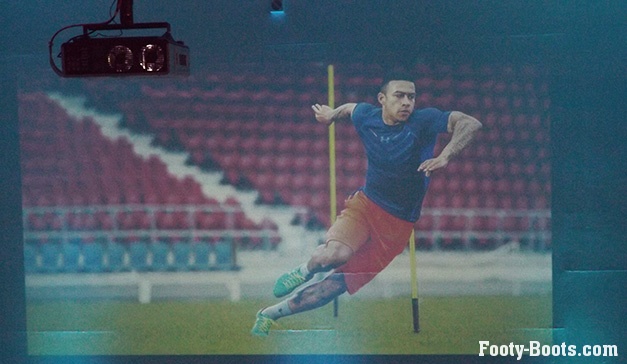 During the World Cup Memphis worked under the management of Louis Van Gaal who will be his club manager at Manchester United. He said of Van Gaal:

“Van Gaal is different. His performance on the training ground is different from other trainers. After the World Cup he told me to stay hungry and I told myself to stay hungry. When I made the decision to stay (at PSV) I wanted to be champion and top scorer. I set those goals and I hoped to achieve them. It will be great to have an opportunity to train with him and work with him.”

Being Compared to Cristiano Ronaldo

Playing week in and week out in the Premier League and Champions League for Manchester United will be a challenge for Memphis, particularly as comparisons are already being made between him and former United winger, Cristiano Ronaldo:

“I heard Leroy Fer speak about it and it is great to hear that from other players. If you read it in the media it is great, but I am 21 and I have not reached the level of Cristiano Ronaldo. He is a big hero for me and one day I hope to reach that level. He scores so many goals and I want to fight to be one of the best players in the world.”

Back to the Football Boots

Since signing for Under Armour earlier this year, Memphis has changed the way he uses his football boots. One of the benefits of the new Under Armour SpeedForm football boot is its comfort. The designers put a great deal of emphasis on making a boot that does not need a break in period.

“Under Armour athlete Memphis Depay unveils the new SpeedForm CRM football boot. To learn how the boot is redefining speed on the football pitch, visit www.underarmour.com.”

Written By
Ramsay
More from Ramsay
Get the low down on Alan Balls famous white football boots....
Read More