What makes the perfect referee? Most football fans would probably agree that it’s someone who can see straight, is consistent and is brave enough to show a bit of common sense rather than slavishly follow every directive that Sepp Blatter and his cronies come up with.

In the UK, there is a concerted attempt to get more referees involved in the game. Indeed, the FA’s National Game Strategy is aiming to recruit 8,000 officials at all levels over the next 3 years.

It’s doing so through it’s Get Into Refereeing campaign with Carlsberg and to mark the start of their second season together, they asked leading sports psychologist Professor Ian Maynard to spend hours analysing leading referee’s performances to create a profile of the ‘Ultimate Referee’.

The question is does the football universe agree with the ‘Ultimate Referee’ selection? 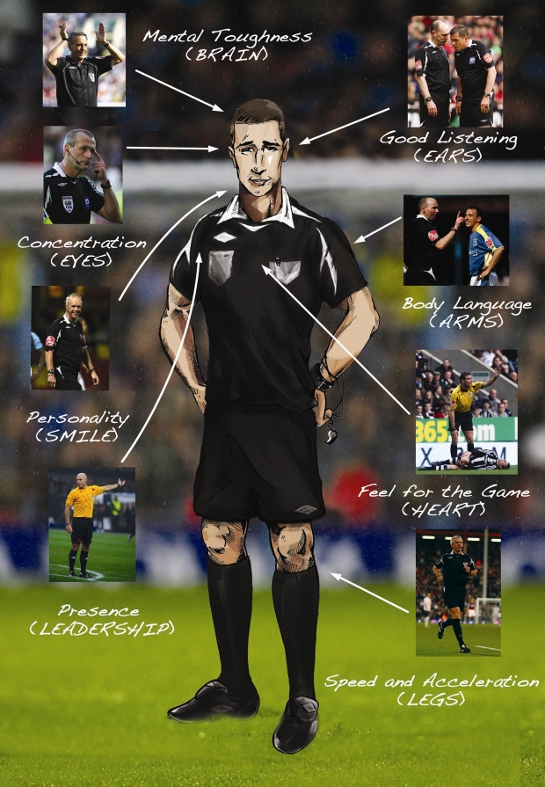 The ability to send out a positive message to the players and say ‘I am in control and enjoying this’ can easily be conveyed via a smile. The smiling referee is more likely to create the positive intensity that is one of the finest attributes of English football.

Listening to the concerns of players and helping footballers understand your actions and decisions are a vital component of good refereeing. Good communication can also defuse intense and potentially problematic situations.

The ability to be focussed on the right thing at the right time is paramount to good decision-making. The intensity of Premier League football breeds untold distractions from players (off the ball), managers and the crowd.

Not many outside refereeing would realise the importance of good leadership and the responsibility that rests on referees shoulders. Many important decisions are a team effort by the officials, hence all four must be confident and focussed and the referee is responsible for these qualities within the team.

A referee must have his head-up, shoulders back, stand tall and most importantly use his hand/arm movements to convey a great deal of information. Strong arm signals play an important role in the referee ‘selling’ his decisions to players, managers and the crowd.

A top referee will use his reading of the game, anticipation and most importantly speed and acceleration to never be too close to the ball, or too far away.

Mental toughness is required to be resilient to the pressures of the biggest matches, to have robust self-confidence, be totally committed and motivated and have self-belief in the face of the greatest adversity.

Feel for the Game (HEART)

The great natural referees have a ‘feel for the game’.'  They know when things are getting too intense and need calming down or when it is important to keep the game flowing.
The referee’s ability ‘to manage the players’ can often determine the difference between a brilliant game of football or a stop/start affair where the whistle dominates the game.

The “Get Into Refereeing” campaign, in association with Carlsberg, is part of the FA’s National Game Strategy, a £200 million pound investment into grassroots football. For more information, go to the Get Into Football web site.